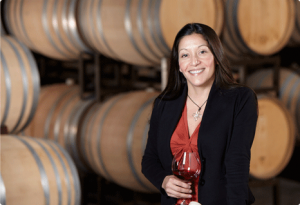 Dan says he doesn’t think people realize how much work goes into one of these vintages. He says it takes 15 years to reach that level of quality. First, you have three years before the grapes even produce a crop. Then it is another three years from the time the wine is made to the time it is on the shelf. Then if you consider that you can’t produce a high quality Pinot Noir from immature vines, now you’re adding two to four more years before the vines are even slightly mature. Then, the winemaker has to get used to the fruit and the first year is a shooting match. It’s hard to know what the proper decisions are until a few years in.

Steve notices that rose petals are the essential quality of the Rochioli vineyard and Teresa agrees. They also taste berries.

Next they taste the Hallberg Pinot Noir. Dan says these two wines show the characteristics of their vineyards. The Rochioli is red fruity and velvety while the Hallberg has more blueberry and blackberry and cool climate characteristics. Dan thinks they both have good acid and so an oily fish like salmon would go well with it.

Dan thinks the Hallberg would bear three years in the cellar.