Today on California Wine Country with Steve Jaxon and Dan Berger, our three guests all come from Santa Rosa Junior College Wine Program. Kevin Sea is the head of the program, Mark Stupich is the winemaker and Cassandra Howard is a student. Cassandra has done the Wine Service and Evaluation program and is now finishing in Wine Business and Marketing. Before that she lived in Asia to learn Chinese and to teach English and became a wine blogger writing about wine in Asia. 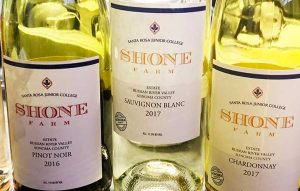 Steve tells about how the SRJC wine program started in the 1970s with Rich Thomas. He was the original source of knowledge in the county. Today the program continues with an updated curriculum and a more developed wine production. Mark Stupich is the winemaker now. He succeeded Jeff MacBride. They make Sauvignon Blanc, Chardonnay, Pinot Noir and Syrah. Their next project is to build a tasting room. They sell wine to support the program.

Even compared to many 4-year colleges, SRJC is a very sophisticated program, says Dan Berger. Even Sonoma State does not offer winemaking, so many students start at SRJC to learn production, then transfer to Sonoma State for a first-class wine business program.

There are 225 students in the winemaking program. They have a lot of new equipment, like a full commercial winery. Dan Berger explains that UC Davis and Fresno State make a lot of wine but it is not sold commercially. Since SRJC sells wine commercially, it is make to a higher standard than the other schools. This Saturday July 20 there is free public tasting open house at Shone Farm.

Today Dan Berger brought a 1992 Navarro Pinot Noir. At the time it was somewhat experimental. It was slightly brownish and the flavors are amazing, even if the aromas “are a little tired.” You don’t usually hold a Pinot Noir this long. The flavors are still there on this one.

Steve asks why Enology isn’t called “wineology.” Dan says, “It’s Greek to me,” and nails it with a wisecrack. Kevin says it’s the Latin root but Dan is actually right about this because it is a Greek root, present in Latin as well as English and in all the neo-Latin languages by the derivatives and adjectives like “enology” and “enological” but not as the noun. The Latin word for wine is “vinum” which is etymologically related to “oinos” the Greek word for wine.

Kevin Sea holds a Master’s from UC Davis and a PhD in Biochemistry from UCLA.

Dan sings the praises of the wine program and Shone Farm and says all the community should support it. It is a hallmark for the community, that feels like a small town. Dan affirms that this is a University program at a junior college.