This week’s guests are Julie Pedroncelli St. John and Ed St. John from J Pedroncelli Wines, as well as Sajive, owner of Bottle Barn, and Barry Herbst, their wine buyer.

The first tasting is a Rosé that Dan Berger brought in. It comes from Mount Beautiful, North Canterbury, in New Zealand. Dan says this region will become very well known in the next few years. He says this wine is “soft and sweet” and everyone enjoyed it.

Julie briefly tells the story of Pedronceli, which started with her grandparents, Giovanni and Giulia Pedroncelli, who bought a shuttered winery during Prohibition and made a living selling grapes at first. Then after Repeal, they returned to production. Her father Jim was the head of wine making. Now the second, third and fourth generation are all working in the business in different roles. For everything you’ll ever need to know about Pedroncelli Winery, visit their website http://www.pedroncelli.com/ 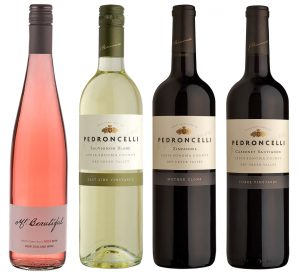 They are located in Dry Creek, which Ed describes with great affection, saying they have been in Dry Creek before it became famous as the Dry Creek Valley. They just promoted Montse Reece to Winemaker last year. She is only the third winemaker they have had in their 90 year history and the first who is not a family member. They have had only three winemakers in the 90-year history of the company.

Dan Berger describes the iconic wines of Pedroncelli, starting with Zinfandel, which Julie says is their flagship varietry. They brought in a Saugvignon Blanc 2016, their flagship wine Mother Clone Zin, and their Three-Vineyards Cabernet Sauvignon.

The tasting begins with their Sauvignon Blanc, which is made without any oak, and Dan says that it would go very well with some spicy Thai food. “The structure is gorgeous,” he says, and suggests it would bear 3 or 4 years of aging.

The next tasting is a 2014 “Mother Clone Zinfandel” which Ed explains got its name from the old Italian practice of “borrowing wood” when growers would give cuttings from one another. Once, a grower was asked where a clone came from and he replied that it was the “mother clone” meaning it was his best original source. They then trademarked the term.

Dan says it shows flavors of violets, black cherries and a little trace of pepper, almost a subtle nutmeg in the aftertaste, a gorgeous wine…. Just stunning, gives you the real character of Dry Creek Valley.” He suggests it would go very well with some lamb.

Ed adds that this is wine is what they are striving for at Pedroncelli and adds, “My favorite thing to pair with this wine is a glass.”

Ed says that today many Zinfandels are “fruit bombs” and Dan and Steve agree, they slap you in the face, you’re tired of it halfway through the glass. This Zin lets you enjoy a second and third glass without losing focus.

Ed tells how he was recently tasting their 2017 vintage, with winemaker Montse Reece. It is her first at the winery as winemaker. She said, “We don’t make fruit bombs, we make spice bombs.” She Julie agreed that they strive for spice over fruit flavors.

Sajive asks them to describe the Dry Creek Valley Zinfandel style and Julie replies that it is the spicy berry flavor. Dan adds the wild strawberry flavors are also present which comes from harvesting the grape when it is not over-ripe.

Dan calls it an exotic wine that will age as well as you want it to. Steve says that he got tired of Zinfandel when it was too fruity, but this is totally different, silky and smooth and not hitting him on the head.

Dan adds that it has good acidity because they don’t wait until all the grapes are ripe because some of the grapes will be over-ripe.

Ed describes the winery’s beautiful grounds and tasting room and how Dirk the Dog is everyone’s friend there. They are celebrating their 90th anniversary this year so they are going to have several celebrations going on.