Alan Baker from Cartograph Wines joins Steve Jaxon and Dan Berger on the first California Wine Country show of 2020. He was last on this show in December of 2018. 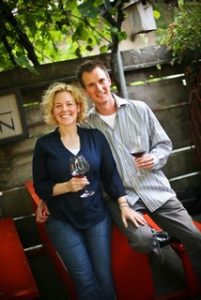 Alan Baker was a Music Major in college and worked with music in public radio for 15 years before he got into wine. “It was a Riesling that got me hooked,” he says, as he tells the story. In 2005 he moved to Healdsburg. “I got bit by the bug.” He loved it so much that it was time to get into the business. He made wines at Crushpad in San Francisco, then he got hired to work there. He did also take some classes at UC Davis. 2009 was the first Cartograph vintage. They make about 2000 cases per year.

The Cartograph label is a circle with five points, which show where he and his wife discovered wine, separately at first and then together. His tasting room is downtown Healdsburg next to Vallette restaurant (whose owners are also Steve’s friends.)

Healdsburg has a fun weekend January 24-26, the Healdsburg Tastemaker Weekend. It is a promotion for the community but also a time of year when chefs are not quite as busy as usual so they are able to book special events with chefs and winemakers. There are also cooking classes with Cousteau Bakery. Go to stayhealdsburg.com to find the Tastemaker Weekend link.

They are tasting a 2016 Riesling that Dan says is “just about ready,” now. Dan likes to keep Rieslings at five years, which is when they expand. Dan says it’s a year shy of when he would drink it. It is in its prime right now. It has good acidity and has very little sugar.

Dan Berger tells about how difficult it is to start small and go commercial and have it be profitable. Alan says it comes out as an expensive hobby and a labor of love, still, while it develops.

This year for the first time they are doing two Rieslings. The got some from Willamette Valley in Oregon and some other Riesling grapes from Marin County. They picked late, October 25, at 20.1 Brix, not very ripe. Dan says that sweetness sells Rieslings but Alan is “a dry freak” who makes a Dry Riesling and then has to wait for it.

Also in the studio today is Glenn Dennler, also a winemaker. For the rest of the episode they taste and discuss wines from both of today’s guests.