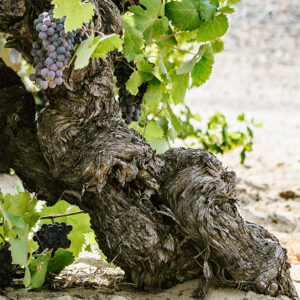 He made his first commercial wine in the early ’80s in Oakley, California, then moved to the Sonoma Carneros area in 1989. But he made wine with his grandfather too. In 1982 he had graduated from UC Davis and purchased the old Firpo winery which closed in the 1930s. Hilary has six siblings and sister Megan and brother Henry also work at the winery. Tom Gendall was named head winemaker in 2020. Katie Hoggins is also a winemaker there. She and Tom Gendall both are New Zealanders. Their profiles are all on this page of the Cline Family Cellars website.

All the wines that they brought today are from a new Sonoma AVA tier. This Chardonnay comes from their ranch in Carneros. They also have the Fog Swept Pinot Noir from Sonoma Coast, the Eight Spur Zinfandel from Dry Creek and a Cab from Alexander Valley. These three wines make up a new tier in the Cline portfolio.

The Chardonnay is called Hat Strap because of the winds in Carneros. They had trouble with the wind, which was blowing down glasses in the tasting room and blowing hats off heads too.

Dan Berger says that the Cline Family Cellars wines are interesting because many of them come from ancient vines. Even the vines they originally planted are 25 years old.

Next they pour the Fog Swept Pinot Noir, from the Sonoma Coast appellation. Dan Berger asks about a clone listed on the label that he doesn’t know, clone 31. It’s a blend of 115, 5 and 31.

At the beginning before they planted their vineyards, they were looking for a wine company that would grow grapes on the property, and they found Gallo. Fog Swept is the name of this wine.

They accept reservations and also walkins. In January they are doing two-for-one tastings. They are located in the Carneros region.