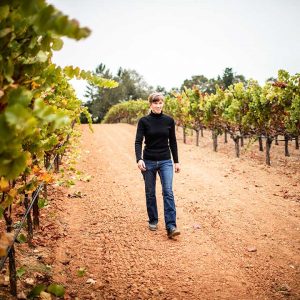 Eva Dehlinger from Dehlinger Winery is our guest on California Wine Country with Steve Jaxon and Dan Berger today. She tells how her father founded the winery over 40 years ago. Dehlinger Winery is small, independent family-owned and operated in the Russian River Valley. They specialize in four varietals, Chardonnay, Pinot, Cabernet and Syrah. Eva is the winemaker and general manager.

Eva became a winemaker by being born onto a farm and having a strong connection to agriculture. She studied environmental sciences at Stanford. She thought she would become a brewer and started studying brewing at UC Davis, then had an epiphany and realized she needed to work with wine.

Dan Berger got to know Dehlinger Winery when it was founded in the 1970s. When Dan started writing about wine, it was hard to find the wine. Dan had to travel to Sonoma County to taste it. Dan says that at the time, nobody had heard of Pinot Noir from Russian River Valley. They were pioneers, it was considered very obscure there. Russian River Valley wasn’t even an official appellation then and Dan says the roads weren’t even marked correctly and he got lost.

They taste a 2014 Russian River Valley Chardonnay, unoaked. Dan says it’s very gentle with a fresh fruit component. Dan says that the newer drinkers like a Chardonnay that is more delicate and not so oaky. The 70s or 80s style wines were fleshier. Today better quality wine making means a more delicate approach to oak. Barry says this has a silky texture and harmonious flavors. Dan says it’s soft but not lacking in acidity. Eva says it’s very fruity and fresh and would have a broad appeal.

Eva’s white wines are made with minimal skin contact and they do not make orange wine. The goal is to extract more different flavors and she thinks Viognier is good for that. Dan says the skin contact white wines tend to want to spoil so a winemaker has to be very strict with sanitation. Dan tells of a wine from the Jura region in France, which have a very strong odor. This one is cleaner and fresher. It has just enough of the “orange” style to still taste the Viognier.

Next they taste a 2015 Dehlinger Winery Chardonnay, which is a counterpoint to the one they just tasted. This is a traditional oaked Chardonnay, no skin contact, barrel fermented and aged for a year on the lees. Dan says this is the way that oak should be done. Eva says it is unfiltered so it retains a lot of textures and flavors.

Then the 2015 Dehlinger Winery Altamont Pinot Noir is up for tasting. Altamont refers to the soil type on their property. 2015 was a very classic vintage in the region, but with low quantities. Particularly the Pinot Noirs, have very intense flavors and color.

Finally they taste the 2015 Dehlinger Winery East Face Syrah. In really good years, they make a Syrah called East Face and this is one of their rare ones. The hill slope faces the east. They made about 165 cases of this wine. It is one of her favorite recent vintages.

Eva loves to pour their Cabernet because people aren’t used to getting Cab from the Russian River Valley. It’s quite delightful with complexity and character. Dan says it’s not lush, but invites pairing with food. Steve suggests lamb chops. Barry says it’s subtle, not cloying, and balanced. Dan likes that the family makes it the same way and they haven’t make changes to it.