John Pepe, winemaker at Pech Merle Winery, joins Steve Jaxon and Dan Berger in the studio today. Barry Herbst is also in. Bruce and Cheryl Lawton own the Pech Merle property and started the winery, and John Pepe is their winemaker. His story in wine begins as he is from an Italian family. Both grandfathers made wine at home. His paternal grandfather made wine at home in Cleveland and his mother’s family did the same thing in Brooklyn. They would receive grapes from California. Dan reminds us that they came with labels that said, “do not add sugar or it will ferment.” 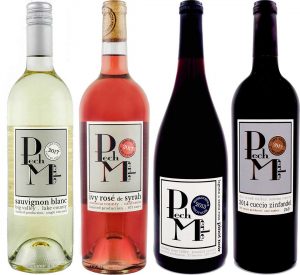 Steve tells about drinking his grandfather’s wine when he was a kid, too. John says he grew up drinking Bubble Up with a little red wine in it. When his family moved to Sonoma County, it was all agriculture. He wanted to change careers so he started in viticulture since he arrived in 1977. Santa Rosa was a sleepy little town then.

Their first tasting is a Sauvignon Blanc, 2017 Lake County, Big Valley district. The vineyard is fairly flat, but in a river bed with heavy loamy clay soil. John Pepe says that they don’t sell that Sauvignon Blanc in the tasting room, it’s more for wine by the glass and restaurants. In the tasting room they feature more expensive hand-crafted wines.

Pech Merle is pronounced “Pesh Mel.” It’s named after an ancient cave in the south of France. 25,000 years ago, the civilization that lived there left many

cave paintings. When the owners visited the Pech Merle caves in France they decided they liked the name and wanted to name their winery after it. They plan to build an underground winery in Dry Creek.  The owner, Bruce Lawton, manufactures structural concrete for bridges, tunnels and caves. 2017 wrapped up their 10th vintage.

The second tasting is a Rosé of Syrah, from Mendocino County. It has been out for about a month. It is meant to be juicy and refreshing. Dan says the aromatics of this wine are interesting; it’s Syrah but you never get such flowery aromas in the red version.  By the way, the Ivy Rosé also took a double gold at the SF Chronicle competition.

John Pepe was also a guest on California Wine Country on May 24, 2017. Here is the page with the podcast of that episode.

Steve points out that Rosés are being made from all kinds of grapes. He asks Dan for his favorite source and he says it’s Grenache. He also loves Rosé from Pinot Noir. Nevertheless, says Dan, this Rosé of Syrah is fabulous. He says picking it early is important. The market for Syrah grapes is now unexpectedly strong, because people want it to make Rosés. John says that after the “disaster” of the movie “Sideways” which he says ruined the reputation of lots of wines that weren’t Pinot Noir (it didn’t just affect Merlot, they say) it was hard to sell Syrah grapes. But John says that the market for Syrah grapes is better now that winemakers are using it to make good Rosé. He also likes that it keeps its pink color better than other grapes that may oxidize sooner and produce a kind of orange color. Dan says its bouquet will develop after 6 months in the bottle. Barry says that Rosé used to be a seasonal favorite but now people are buying it year-round.

After the break they taste a 2013 Pinot Noir. It has won some Gold Medals and it got 95 points. Dan likes it and says it’s in its “funky stage” of maturation right now and that at age 10 it will be at its peak. Barry says it has a charming, candy quality that some people really like. Steve likes it for its fruit. John explains his approach with Pinot Noir, saying, “the more hands-off you are in the process, the better the results are going to be.”

Dan’s wine column in the PD today is about oak flavors in Cabernet Sauvignon, and why Cabs smell more like barrels than like grapes. Dan thinks grapes should dominate. He’s not disparaging those wines, but they’re not his favorite style.

Now they taste a 2014 Cuccio Vineyards Zinfandel. Dan says that 2014 was the powerhouse vintage. Dan asks its aging regime. John Pepe says it’s bottled after about 11 months, before the next vintage. He uses different sources of American oak, this is Pennsylvania. Dan says that oak from the central US, Missouri, is warmer and so the grain is wider and the wood imparts more flavors. Barry says that they were experimenting with oak from 14 different states at Ridge Vineyard, recently. Dan says it’s got black raspberry and some cumin spice notes. John Pepe says that the Cuccio vineyard is planted to the Deaver clone, from Amador County, one of the oldest Zin clones in California. There the soil is really red, looks like terra cotta. Dan thinks it would go with pizza. John Pepe has been making wine from this vineyard since 2010 and he says it takes a while to get used to how the grapes will perform and how to treat them. He gets hints of bay leaf spice with its own fruit character.

This year in the vineyards there is early bud break, due to the warm weather. John Pepe talks about being out in the vineyard today, pruning. 5% of the vines have budded out already. Dan says that’s all right, but if it gets to 15% too early, it’s trouble. His peach tree is blooming at least two weeks early. They had five days of warm weather. The problem of this time of year is if a frost comes after the bud break, as it did in 2008, it can ruin the vines.

Their tasting room is open seven days a week, from 11am-6pm. They have a chair lift in their tasting room, which they got when they did a photo shoot about skiing. The Pech Merle slogan, “Devotion never tasted so good” is a reference to the top tier of their wine club, called “Devoted.”