Pinot Noir is the subject of the day, as this week we are live at Bottle Barn’s Pinot Noir Tasting at the Hyatt Vineyard Inn. Steve Jaxon, Dan Berger and Barry Herbst are at the California Wine Country table at the Hyatt for the show’s first remote broadcast. The guest list includes Suzanne Hagins of Horse & Plow, Maria Lentini of Brack Mountain Wine Company, Robert Mueller of Mueller Winery and Drive Hall-of-Famer Dr. Dave McCuan.

Barry tells about the first Bottle Barn event last May which was all about Rosé. They are planning to do more of these. They try to get principals and winemakers there. They have 60 Pinot Noirs to taste and plenty of people to taste it. They plan to hold another event like this one in October for Sparkling wines. 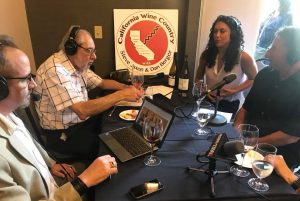 Dan explains that Pinot Noir is popular and that in the last 10 years Sonoma County has led the world in Pinot Noir. It has 5 separate appellations that make world-class Pinot Noir. Napa Valley is limited for Pinot Noir because it’s Cabernet country. Dan says the #1 reason for its popularity is that the tannins are low, and second that you can make it in different styles, light, medium, heavy, oak, no oak, beaujolais style. There’s one for everyone. Dan’s favorite open secret is that great Pinot Noir goes with fish. It is like some Italian reds in that way. Dan and Steve agree that Pinot Noir can even be chilled.

Many local Sonoma County wineries have brought wines to this tasting, and Barry also tells about wineries from Oregon and other parts of California. Dan says he likes that about half the producers here are small local ones who are not well known. Barry says that it’s a nice way to make the event unique, that they have not only the big producers.

Dan says that the Oregon styles have a little more tannins but they go into a depression sooner than California wines, so that in 2 years they display very well.

Steve talks about the California Wine Country logo sign, with the state of California as a corkscrew, with the names of the major wine regions. Dan explains that Monterey is coming back as a Pinot Noir producer and the Central Coast vineyards are big producers all planted to Pinot Noir and Chardonnay, doing a fabulous job. Dan says that Santa Cruz is a very strange area, it’s variegated and tricky, so some of them have had a hard time understanding their own fruit. Santa Barbara is really a hotbed and Sideways really focussed our attention. There is a region in Santa Barbara county called Santa Rita Hills, which will eventually be known as one of the top Pinot Noir areas in the country. Dan says Sonoma makes more high quality Pinot Noir but that Monterey is very good too, only they make less of it.

Dan points out that the room is gorgeous but there is also an outside room with tables, which is great at the end of the day as it cools off, and so people can sit down between tastings.

Barry introduces the next guest Suzanne Hagins of Horse and Plow dot com. Her current label is called The Gardner. They make a few different brands of wine, they also make cider. She explains that they are sister brands but make Pinot Noir and Chardonnay under the Gardner label. Dan says he’s tried their ciders and they are really exciting. They also had some of their wines in Dan’s competition last May. They have a very small production and limited distribution all sold locally. They have a tasting room in Sebastopol and they are at Bottle Barn. They make a lot of different white varieties, Chardonnay, Pinot Gris, Pinot Blanc, Sauvignon Blanc, Riesling and a lot of different reds, under the Gardner label, Pinot Noir, Grenache, Petite Syrah, Cabernet Franc and Carignan. They do work exclusively in the North Coast appellation, so Sonoma, Napa and Mendocino, and all organic.

Dan says their 2014 The Gardner Pinot Noir is a bargain and he’s tasting it and says it is fruit driven, has wonderful rasberry or strawberry aromatics, the oak is very restrained and the aftertaste shows how the wine will age well. Dan suggests about two more years.

Steve then introduces the next guest, Maria Lentini of Brack Mountain Wine Company. It’s a family owned wine company that started in 2008 in Sebastopol. Dan Fitzgerald is their winemaker. He was studying architecture and didn’t like it so his father invited him home to work a harvest and figure things out. He fell in love with wine and then worked other harvests and worked for many other notable wineries and winemakers. He and his father and family decided they wanted to produce good Pinot Noir at an accessible price, below $30. Dan says there are a lot of pricey Pinot Noirs but this one “really delivers,” and it’s $20. She says they want to over-deliver, for their prices. Dan says it’s elegant and that’s a lost art in this business. Dan says we need more of them. They don’t have to have the power of Zin of Petite Syrah. Barry says it sold very well. It’s called “Bench” because all the grapes come from the bench lands. Better drainage, the vines have to struggle a little bit more. They don’t have a tasting room but she can set up an appointment for a tour. Dan says their wine has a gorgeous silkiness.

After the break, Barry introduces Robert Mueller of Mueller Winery. He tells how they started in the early ‘90s in Healdsburg, they were there for 10 years then they moved to Windsor where they still are. They are very small and sales are limited primarily to their tasting room, but they have one wine that is sold at Bottle Barn. They always reserve some product for Bottle Barn and for local restaurants. 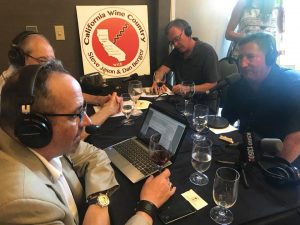 Steve quotes from their website: “Every good movie, great novel, grand romance has something in common… balance. An engaging beginning, fine layered nuances in the middle, a satisfying finish.” Dan says he agrees so much that it sounds like he could have written that himself. Dan also says that this is actually what Robert’s wine achieve.

Dan asks Robert to talk about his Rosé, which is made from Pinot Noir. His goal is to make a food-friendly Rosé, not too sweet, and Dan agrees it would go with a lot of different foods. It has beautiful strawberry aroma and good structure. Dan asks where the grapes are grown and Robert tells they use many vineyards and describes some. He has used some of the same growers for 20 years. He knows exactly what he’s going to get. He also makes a small amount of Chardonnay.

Dr Dave McCuan is the last guest. He is the Senior Political Correspondent on The Drive, and a Professor of Political Science at California State University Sonoma. Today Dave is here to talk about wine, as he does have a cellar and is a wine enthusiast. He describes the selection of Pinot Noir that is at the tasting event, including a lot of local production. The Alexander Valley is well represented. He even saw a wine from the Czech Republic. Dan mentions that they grow an enormous amount of grapes there. They are now converting some of their acerage to more popular varieties like Chardonnay and Pinot Noir. They have a lot of white varietals and they grow hops too. In the last three minutes, Steve asks Dave for his opinion about the presidential pardon of the former Sheriff Joe Arpaio.