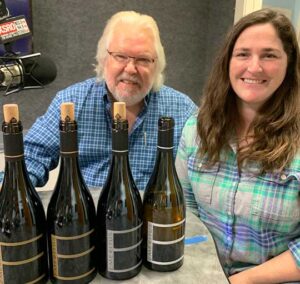 Mari Jones from Emeritus Vineyards is Tom Simoneau’s special guest today on California Wine Country with Steve Jaxon and Dan Berger. Mari Jones takes the title President of Fun at Emeritus Vineyards. Bryce Cutrer-Jones in the early ‘90s chose a 115-acre site for Pinot Noir. He sold Sonoma-Cutrer in 1999. Tom Simoneau tells about how Mari’s father was one of the pioneers of Sonoma County Pinot Noir.

From the Air Force to Wine Country

Mari tells how her father went to the Air Force Academy and he was a fighter pilot for eight years. He got interested in wine when working as a pilot for a general, in Europe. One day he learned that Burgundy was a place and not just a kind of cheap wine. After the Air Force he went to business school and developed a way to use vineyards as a tax shelter. Eventually he built up a vast personal cellar. He succeeded in merging new world technology and old world sensibility, particularly between Burgundy and California. Finally he bought Hallberg Ranch and that is where this wine they are tasting comes from.

They begin tasting the Pinot Noirs from Hallberg Ranch. Their total production is only between 8000 to 10,000 cases per year. The name Emeritus has a story. They brought a lot of staff over from Sonoma-Cutrer, when Emeritus got started. In Latin it means “earned by service” or in modern English, old men out to pasture.

Tom Simoneau mentions their dry farming technique, which they do at Emeritus. The Hallberg Ranch Pinot Noir is picked at 22-24 brix. Mari Jones explains that often, when irrigating, you get chemical ripeness without flavor development. They find that they get higher acid, smaller berries, more intense aromatics and smaller juice to skin ratio.

Winemaker David Lattin has been there since 2017. He has a history of working with some very famous estate-grown Pinot Noir producers in California. Emeritus has a small production so only one wine is in the wholesale market, this Hallberg Ranch. Most of their other wines are under 500 cases. Their ranch and tasting room are located in Occidental on Hwy 116.

Then they taste the Pinot Hill East, about 8 miles southwest, to Pinot Hill vineyard in Sebastopol Hills. It is cold and foggy. The vines are on an east-facing slope, so they get no direct sun in the summer. The west side has completely different conditions and the wines are equally different.