Personal favorites and competition winners are at the center of this edition of California Wine Country with Steve Jaxon and Dan Berger. Barry Herbst is also in for today’s show. Since everyone in the wine business is in Sacramento at the Unified Symposium today, which is an important meeting for the wine business, none of the usual winemakers and winery owners were available. Steve, Dan and Barry taste a Chardonnay, a Riesling, some Merlots and a dry Chenin Blanc from Dry Creek Vineyards that Dan brought in. Also, Barry has brought three winners from the San Francisco Chronicle competition last week, where Barry was a judge. (There were 63 judges and they tasted about 110 wines a day!) 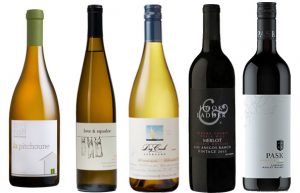 Steve mentions that California Wine Country has been nominated for three more Taste Awards, the awards will be held in March in LA.

A smoky Chardonnay is the first tasting, from Sonoma County, a 2014. Dan says the secret to this wine is the fruit, with citrus flavors, grapefruit notes. Personally he thinks the oak is too strong, as he prefers less oak than this. La Pitchoune is its name.

Then Dan opens and talks about an Oregon Riesling. It’s cooler up there and ideal for this grape. The name of the wine is Love and Squalor. It’s from the Portland Wine Company. The fruit is like tangerines. It’s not a traditional Riesling, as it’s quite tart. Dan says that there is a trend toward drier and drier Rieslings. That makes them go well with food, especially spicy Asian cuisine.

Next, they taste another Best of Class winner from the San Francisco Chronicle competition. Dry Creek Vineyard Dry Chenin Blanc. Dan says that this comes from grapes that were grown in the Stockton delta, probably the richest soil in the world. Dan says that with nearly a year in the bottle, you start to get the fruit components in the flavors. It goes for $11 retail, and uses no oak at all, which helps keep the price down. Dan suggests Lobster Tacos to go with this.

The Hook and Ladder 2014 Merlot is the next tasting. It won double gold at Harvest Fair and at the SF Chronicle. It’s what people used to know Merlot to be, it’s soft and has flavors of plum, yet it has good acidity. Hook and Ladder grows fruit in Russian River Valley and the Chalk Hill area. They harvest early enough to capture the acidity. All their reds have great structure and balance. Barry points out that the family owns all the vineyards so they have complete control.

The last of the reds to taste is from New Zealand, a fascinating wine and one of his personal favorites, says Dan. It’s from Pask, a tiny little producer in the Gimblet Gravels regions of Hawk’s Bay in New Zealand. It’s a 2013, made in the old fashioned way with more time in the bottle. It has a nice herbal component. It sells for about $20-25 per bottle. It has only just now started to be imported into the US.

This week is a short show, due to a Golden State Warriors basketball game on the CWC flagship radio station, KSRO in Santa Rosa. Next week will be a full show featuring Balletto Vineyards.