Jeffery Mayo of Mayo Family Wines is our guest today. Tom Simoneau is in today while regular co-host Dan Berger is away. Asked to sketch the history of Mayo Family winery, Jeffery tells how his father planted the vineyard with the intention of selling Chardonnay grapes. He attended a party with a local winemaker who told him that rather than sell his grapes to end up in someone else’s blend, he could make his own wine in his barn with his own grapes. The first year, 1993, they made a couple of hundred cases that he had to give away because he wasn’t licensed. The next year, they had enough for 1000 cases and his father asked him to help sell it. He replied that he needed a year to study winemaking and wanted to go to France for that so he spent 1994 there. 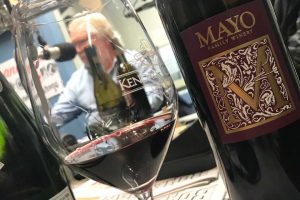 Today’s first tasting is a 2015 Pinot Gris which Steve says is special. Jeffery explains that it is made with no oak at all. They pick it on the earlier side, when it is still high acid. They ferment and age it in stainless steel and they prohibit any malolactic fermentation. It is fresh and light, from La Cruz Vineyard, a Keller Estate winery. Tom says this Pinot Gris could be a very good Thanksgiving wine, since it is light enough to go with almost anything. Steve agrees it would go well with turkey.

Then they taste a 2016 Chardonnay, in the opposite style, oaky and buttery. They use 60% new oak, toasted, left on the lees for 6 months. They pick it late to get a little more viscosity.

About 95% of Mayo Family wines are vineyard-designated, which allows buyers to get to know and choose their wines based on the vineyard. For example, next they taste a Laurel Hill 2014 Pinot Noir from the Mayo estate. They planted Chardonnay in that vineyard at a cool spot in the bottom of the valley in 1990 and they thought that Pinot Noir would grow well in the same place, and it does. Steve thinks that Paul Giamatti’s character Miles in Sideways would like this wine. It is a blend of four different clones. It has the cranberry rasberry flavors that might make it a good Thanksgiving wine.

Jeffery describes Michel Henri Berthoud, who has been their winemaker since 2004. He got a degree in Fermentation Science Fresno State and worked at Chateau St. Jean (“Saint Jeen” as they say). Mike also makes cheese and salami, and he and Jeffery are taking cooking classes together. He speaks three different languages.

Jeffery’s father built the winery. He says, “we payed the dumb tax, we built out where we couldn’t have tasting room or events. We’ve done everything wrong you could possibly do in the wine business.” Now they have a standard tasting room in Glen Ellen and a larger facility where they can feature food and wine. In 2004 they started the Mayo Family reserve room. It has a commercial kitchen and they do a 7-wine 7-food meal for their guests, with small portions. It’s a meal for most people but it’s about the tasting and variety, over 90 minutes.

The Sonoma County fires hit the Mayo family hard. The winery was 80-90% destroyed. They had 10 wines fermenting, and no power for 10 days. His tenant helped him and they saved most of the wine. They know they have two tanks that got VA, so they might have to make vinegar out of it. His parents lost their house. Their equipment burned.

Tom Simoneau notes that Jeffery has been winning Gold Medals, 9 this year, 8 last year, at the Harvest Festival.

Next they discuss the Alicante Bouschet wine, and grape. Professor Henri Bouschet took Petit Bouschet, crossed a grape with another grape, both viniferous, to make this grape, which he named after the Spanish city. https://en.wikipedia.org/wiki/Alicante_Bouschet. This grape has red flesh and also red juice. All other red grapes have clear juice, but this is dark red. The alcohol is 14.7%. 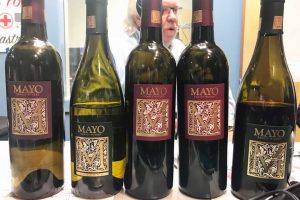 Next they taste the Mayo Family reserve Cabernet Franc, from up in the hills above Sonoma. It won best in class this year. It has beautiful French oak flavor, it’s a more polished and refined wine than the Alicante.

It comes from the Los Chamizal vineyard, which is maybe the most photographed vineyard in Sonoma County. They have two different facilities where they make wine. They hope to get yields of 3 tons per acre. He and Mike are taking culinary classes at the JC Culinary school, and they only have a few more classes before they get their certificate.

After a plug for the podcast, and before they open the sparkling wine, the talk some more about Alicante Bouschet. 50 years ago it was much more common than it is today. Winemakers used it to add color to their wine. It grows well and is a vigorous producer. It had thick skins and travelled well. During Prohibition, a family could make 200 gallons of wine per person, at home. It couldn’t leave home, but 200 gallons per person was a lot for a big family. The grapes were grown in California and were shipped across the country. 3 years into Prohibition grape prices quadrupled, to $250 a ton.

It’s by fermenting on the skins that red wine gets its color, usually. These “teinturiers” have red flesh and red juice. (Teint means tint in French.) Lenoir is a Teinturier grape.

Next they open a sparkling wine. Prosecco is up 4-5 % this year. This is a small grower champagne. Small producers who used to sell to the big houses now do their own high quality small production versions, such as 3000 cases instead of 100,000. This is a Brut, 60% Pinot Noir and 40% Chardonnay. This is is a national trend. Retail prices for sparkling wines are coming down, and Tom Simoneau points out that this time of year is the best time to be buying champagne and sparkling wines.