John Buechsenstein is today’s guest on California Wine Country with Steve Jaxon and Dan Berger. John is a winemaker and has taught about wine at UC Davis, as an adjunct professor in UC Davis Extension, since he was a graduate student there, 40 years ago. He has just published a new book called Wine and Place, A Terroir Reader and today’s show is a discussion of Terroir including tastings of four different wines chosen as examples of terroir.

John explains that being a winemaker for so many years and visiting many producers around the world, he has noticed particular taste signatures of different places. Terroir means the flavors of a wine that comes from the location where the grapes were grown and the wine was made. It is a French term adopted into English. It is more than just soil; it also includes the geography of the place, which includes humans and their traditions both culinary and agricultural. 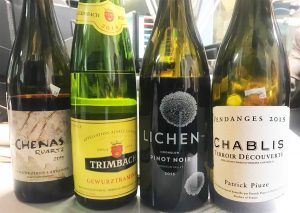 Dan adds that more limited spaces are more likely to show it, because the larger the spaces, the more variation there can be. John agrees but adds that there are also powerful regional terroirs. There are a lot of agricultural products that show the flavor of a place. Dan gives the example of Parmigiano Reggiano cheese, whose flavor is unique to that area’s land, weather, cows and procedures. Barry says that many wineries show soil samples in the tasting rooms, to connect wine flavors to the soil, but Terroir is far more than just the soil. 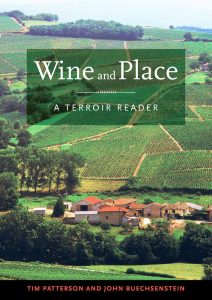 Dan explains that Terroir is the result of many factors and uses the Chablis that they are tasting as an example. It is made from 100% Chardonnay grapes but tastes nothing like a Chardonnay wine we are familiar with. The Gewurztraminer is another example, from Alsace. John explains the effect of the weather on the grapes grown there. Dan describes the flavors of Gardenia, Carnations, all kinds of spice notes, no wood contact whatsoever, with a rich mid-palette.

John Buechsenstein explains what he tells his students who ask what food would be good to eat with this wine. He tells them to look at what the local people eat, in the same region, with that wine.

Next they taste the Chablis Terroir Découverte from Patrick Piuze. Barry says that Chablis is part of the Burgundy picture but has its own characteristics. This one is grown in limestone and chalk soil, in a cooler area of Burgundy. John says he is amazed that Chablis is even part of the Appellation Controllée of Burgundy (Borgogne) since it is “in a world of its own” compared to other Burgundy wines.

Steve asks about the name Chablis. Dan explains that prior to Prohibition, on the East Coast, the only wines that were widely available were from France as there was no Californian wine on the east coast. After Prohibition, the French merchants flooded the east coast with Chablis and that name became a generic term for “white wine” which persisted for decades into the mid-60s.

John talks about writing his book together with Tim Patterson, a writer who has written for Wines & Vines and other trade journals, who explained complicated concepts for the general public. Sadly, he passed away as they were finishing the book and with the help of UC Press, he finished the book last year and it was published in January 2018. It is an anthology of writings from all over the world including some that John translated from French. He describes the topics in the book, all about the history of the development of the practices that yield Terroir and of the adoption of the term itself.

Next they taste a 2015 Pinot Noir, Lichen, from Anderson Valley, in Mendocino County. Dan says it is a wonderful region for Pinot Noir production, but these wines tend to me more fragrant and more elegant. They even don’t have the same usual Pinot Noir color. Dan says that eventually, Anderson Valley will be far more recognized for the quality of its Pinot Noir than it is today. John Buechsenstein says that if you poured this for him without showing him the label, he would know it comes from a cool climate. Good structure, good flavor, says Dan, who also, as usual, says it needs some time in the cellar.

Steve says that this is a very important book that everyone in the industry should read. John adds that he believes it is important for people to “get geeky” about this before Terroir is lost. 25 years ago, he learned that there is a government ministry that teaches about the local flavors in the schools and that they do this to make sure that the people know and appreciate their local products, to preserve the practices for future generations.

In John Buechsenstein’s own words: “I really believe in human kind and human beings. I think we like to focus on things that are fresh and local. We like to discover the flavors of where we live. I think if we start to look for those flavors and look for those special flavors and those flavor markers, we will find them. And when we stray far from those flavors, we’ll know, we’ll know that something’s different. So I think we need to keep demanding our Anderson Valley winemakers and our Alsacian winemakers to keep doing what they do best. Don’t sell out to a world techno-style. Keep doing what you do and people will continue to come to you. I see a lot of young wine discoverers actually buying into this old system.”

Barry Herbst adds, “We don’t want to go back to the days of ‘Hearty Burgundy’ and ‘Mountain Chablis’ and one monochrome flavor prototype. It’s really these differences that make it interesting.”

Dan closes saying that we are just blessed to have John Buechsenstein advocating for wine that is tasty and that has local flavor. “It all comes back to uniqueness. It has to be tasty. Basically what John is looking for is tasty, and local flavor.”