Tom Simoneau is a back for his traditional end-of-the-year show with his Wines of the Year and a phone interview with his winemaker of the year, Susan Lueker of Simi Winery. 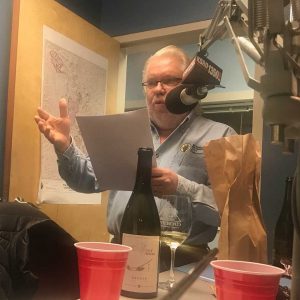 Tom Simoneau’s website Wine Country Live will have the listing of these wines, with information about each wine and winery, and about where they can be purchased.

The shows gets an appropriate opening with the popping of a cork out of a bottle of sparkling wine, Tom Simoneau’s favorite sparkling wine of the year, called Z Brut. They drink a toast to 25 years of talking about wine on the radio together, which they began doing in 1992. It is a multi-vintage blend of 56% Pinot Noir, 44% Chardonnay, a typical Brut blend. Steve notes that they are not drinking from champagne flutes but Tom notes that many sparkling wine producers prefer to enjoy the wine in a glass, so that you get more aromatics on the nose and they taste the nuttiness from the yeast.

Tom explains the traditional champagne method, which is to start with still wine, and instead of picking at 23.5 degrees Brix (a measurement of sugar) you pick at about 19 degrees for a crisp, tart wine, you bottle that still wine, add some sugar and yeast, add a crown cap (like a beer bottle cap) and put it on a rack for however many years you will leave it on the yeast. (This one they are tasting had 4 years.) Usually the cheapest ones spend 8 to 12 months, and the best are from three to four up to as many as ten years. The bottle is kept on the rack then they do riddling, which is tapping the bottle and turning it, until it is on its head and the neck has all the sediment and sludge from the yeast. You run it through a nitrogen solution, pop the cap and the pressure in the bottle from the yeast will push the sludge out, and then they add more wine, sometimes brandy “dosage” to fill the space left. In this case, the winemaker added straight sparkling wine, no sugar added. So they call it “Brut Z” because there is no sugar added. This makes it crisp and dry. The brand is Longboard, since the owner and winemaker is a big surfer.

Next up is the Chardonnay of the Year, which is Albatross Ridge 2014 Estate Carmel Valley, Monterrey. Tom tells its story. The family found a place in Carmel Valley, at 1250 feet altitude, and planted it in 2008. They were talking about wine brands and doing reasearch and they found that their great grandfather was a glider pilot who held the second pilot’s license ever issued in the USA. He flew gliders and taught Lindbergh to fly gliders over their property. It’s a rocky ridge, difficult to plant. Now they make Pinots, a sparkling Rosé and this Chardonnay. It’s cool, close to the ocean, and has nice minerality and stone fruit flavors. They grow it organically but they don’t worry about getting certified, because they are such as small producer with low yields. 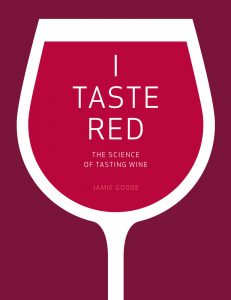 I Taste Red by Jamie Goode (University of California Press)

Next is Tom Simoneau’s favorit “off-dry” white. He explains that a dry white is a Sauvignon Blanc or a Chardonnay so an off-dry white would be a Pinot Gris or a Chenin Blanc, Reisling, Gewurtztraminier, all wines with a little residual sugar. This is the Mayo Family Winery 2015 Pinot Gris from La Cruz Vineyards on the Sonoma Coast.

The Best Value White Wine is a Pedroncelli 2016 Sauvignon Blanc, from East Side Vineyard, Dry Creek Valley. Listed at $17, it may even be found for less.

Tom Simoneau’s Rosé of the Year is The Aerialist Rosé, 2016, from a tiny producer, a husband-and-wife team, where he is also the winemaker at Cunde Vineyards in Sonoma County and she is a aerialist. It’s all Cabernet Franc based.

After the break, a new category, Book of the Year. It’s called The Science of Tasting Wine, by Jamie Goode. Tom said the book has changed his approach to tasting wine that calls it “a crazy good book.” The book as being about the sensory mechanisms and mental processes that are engaged while tasting and describing wine. The book describes MRIs done while people are tasting wine, and that novices and experienced wine enthusiasts show activation in different parts of their brain when tasting wine.

The next tasting is Tom Simoneau’s favorite Cabernet Sauvignon of 2015, a Beringer 2015 Knights Valley, Sonoma County. The Knights Valley is located between Napa Valley and Alexander Valley, and Beringer has been growing grapes there since the mid-1960s. The wine shows red fruit, olives and chewey tannins. 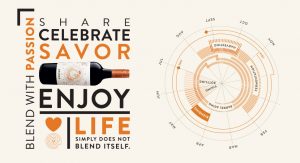 The Upshot label diagram (click to enlarge, back to return)

Next up is a Merlot, which is making a comeback, as we have heard in previous shows. For a while there was too much of it not grown in the right places or made the right ways.

Tom Simoneau notes that one of the side effects of the Phylloxera outbreak was to relocate vines to the the right places, so now, Pinot is in the cold spots, Chardonnay is warm or cold, and Merlot is only in the right places now. Dark plum fruit, big and rich.

Tom’s favorite Syrah of the year is from Ramey Wine Cellars, 2013, Rogers Creek Vineyards, Sonoma Coast. It has 10% Viogner.

Next is Tom’s favorite Blended Red, Rodney Strong Vineyards 2015 Upshot. The label has a diagram of the life of a wine from harvest to bottling. 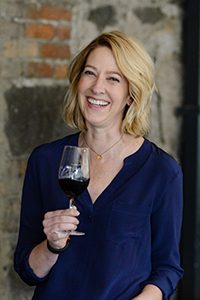 Tom’s Winery of the Year is Simi Winery, which has been making wine for 140 years, and the winemaker of the year is Susan Lueker, who joins the show by telephone.

The Luxury Wine of the Year is the Simi Reserve Cabernet Sauvignon. Steve asks her about her career and she says she has been at Simi for seventeen years, and before that, she was at Dry Creek Vineyard and Kendall Jackson and before that, at Hacienda. She went to UC Davis.

The Luxury Wine of the Year is the Simi Reserve Cabernet Sauvignon. She says she has been at Simi for seventeen years, and before that, she was at Dry Creek Vineyard and Kendall Jackson and before that, at Hacienda.

The Best Sweet Red is from V Sattui in Napa Valley.

Tom’s Most Fun Wine is 19 Crimes from Australia that is named after one of the 19 crimes that could get people convicted of them sent to Australia. It comes with a very clever marketing ploy. You can download an app from the brand’s website to your phone and then show the bottle to the camera, the app will read the label and the voice of one of the criminals who was sentenced to colonize Australia.

The Pinot Noir of the Year is Golden Eye 2014, Narrows Vineyard in Anderson Valley located 10 miles from the coast.