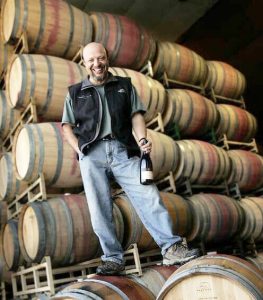 Miro Tcholakov from Miro Cellars is our guest today on California Wine Country with Steve Jaxon and Dan Berger. Joy Sterling from Iron Horse is also staying in the studio, from the previous hour. Miro Tcholokov has won many awards for Miro Cellars wines. He has been the full-time winemaker at Trentadue Winery since 1999.

This is his 31st year as a winemaker in California. He came to the US as an exchange student and worked at Dry Creek Vineyards for 9 years after that before joining Trentadue.

Miro says that the uncertainty about the quality of this year’s harvest, with the threat of smoke taint, has at least driven prices up for bulk wine of 2019 and 2018. There was one vintage, 2008, mostly Mendocino, that had to declassify its wines. Some wines that would have sold for $50 had to sell for $15. But Dan Berger remembers that some wines from 2008 aged well, and the smoke flavor dissipated.

There is one lab in Napa with only 2 machines for testing, and they are testing 24 hours a day. The demand for testing is very high.

Miro Cellars started with its first vintage in 2001 which was released in 2003. He made only Petit Syrah from Dry Creek at the time. It’s a dry farmed vineyard, sustainably grown. The vines are about 50 years old. He always wanted to keep his production small, which he did, about 500 cases, but he added 4 more varietals so it’s about 2500 cases.

The taste a 2017 Trentadue L’Astoria Merlot, which Dan says is in the “big” style of warmer climate Merlots, balanced with good acidity. Joy says it’s “yummy” and every one agree. Dan Berger says these old vines really do deliver and Miro agrees it’s the soil and the terroir too. As usual, the subject of Merlot reminds everyone of the aftermath of Sideways, when there was a glut of poorly made Merlot. Today it’s different, grown in the right place and done right.

Miro Cellars wines can be purchased online and some at Bottle Barn, and also in some local restaurants.

Next they taste a 2017 Cabernet Sauvignon that he makes from (mostly) Alexander Valley grapes. (It is actually 75% Cabernet, with some Merlot and Malbec) His Cabernet has won a litany of golds and 90 point scores. It will be priced in the low 30s at the most, says Miro. Says Dan Berger: “Juicy and flavorful with noticeable notes of dried thyme in the aftertaste and the aroma as well, because the wine does have a real honest to goodness Cabernet Sauvignon lilt to it.”

Miro Tholakov says, “I like varietal aromas. People are afraid to shoe the variety specificity of Cabernet, for some reason, the herbaciousness that may come out. In California especially, they just over-ripen a lot of times to get away from even the slightest level of pyrazenes.”

Dan Berger tells that one of the people who discovered what Cabernet really does in Alexander Valley was the late Justin Meyer from Silver Oak. In the late 60s, he noticed that the varietal components always showed through no matter how late you picked the fruit.  That was why Silver Oak was famous for their Cabernet.

Next they taste a Montepulciano. Miro says there were 11,000 tons reported harvested in Sonoma County. He is surprised because Trentadue has about 7,000 of those tons. Who else is growing it? The vineyard is young, it is an Italian clone. 9 year old vines, they have to thin it a lot. It ripens late, 2 weeks after Cabernet even.

Miro says that Montepulciano is a Tuscan variety. There is a town called Montepulciano but is it surrounded by Sangiovese. It’s grown more in the south, because it ripens late. It has lots of 95 points, best of class and Double Gold scores. Dan says the tannins are not aggressive or bitter. Joy loves the brightness of it. It is hard to find.