Donald Patz joins Steve Jaxon and Dan Berger. Tom Simoneau is also in again this week, while Barry Herbst from Bottle Barn is busy and not in the studio today. Steve Jaxon asks Donald Patz about Patz & Hall wines and Donald explains that they sold the company in 2016. He stayed on to help run it but they got to a point where he wasn’t sure what more to do so he asked to be released from his non-compete clause, which they agreed to.  So on May 1, 2017 he started his own venture, the Donald Patz Wine Group. He is here today to show some wines from all three of his labels, Maritana, Secret Door and Terminim.

James Hall was on this episode of CWC back in April of 2018.

Terminim is a collaboration of Rhone Valley style wine that me makes with a friend of his, François Villard. The grapes come from Mendocino County. The Terminim site describes it so: “The 2017 version of Cépages d’Or is 66% Marsanne and 34% Roussanne, picked separately and barrel fermented in 1-year-old French oak barrels using exclusively indigenous yeasts.” 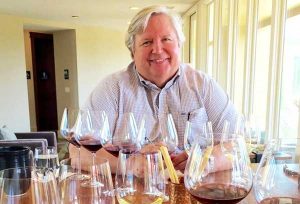 Maritana Vineyards La Riviere Chardonnay is the name. Maritana came from a combination of the sea and mountains. The word Oceans became Maritime and Mountains became Montana.

Later, he discovered that Maritana is a woman’s name in Portuguese and Russian. Dan Berger appreciates that the Marsanne is grown in a cool climate, which makes the grapes and the wine taste right (otherwise Dan says that it can have a flavor of mucilage, a kind of glue.)

Donald Patz wanted to focus exclusively on the Russian River Valley AVA. It is his favorite area for Chardonnay and Pinot Noir. He gets grapes from all over the AVA. He also wanted to rethink barrel fermentation. He uses 90% 1-year-old, 10% new oak barrels. This way they focus on the elegant, pretty, citrusy flavors of Chardonnay. He does not want something “super thick and oaky” and not too much oak. Tom Simoneau points out the aromas of tropical fruit and peaches and the absence of oak flavor. Tom says the wine should have fruit first, “fruit forward” and oak should not be the first thing you notice on the nose. As a grower, Tom wants to smell fruit first, not oak. Dan Berger says in 2 more years this wine will flourish.

For Donald Patz, 2017 and 2018 have been delightful years, as he has been dedicated to his own new labels. He has been able to reconnect with his growers and feels excited and energized to have free reign to recreate.

Donald worked in the wine industry before Patz & Hall. He was a salesperson in the wine industry, so he moved from Eugene Oregon to Santa Rosa, California. He noticed they two towns were about the same size. He has a Biology degree from U of Oregon. He has been at it for thirty years now.

“The new stuff has been so much fun to explore.”

This Chardonnay comes from a specific part of Dutton Ranch. It’s called Shop Block. It’s the only remaining piece of the original 1967 plantings. Some is interplanted, though. This is a 2017 so the 50th year since the vines were planted. This one is more “right there” says Tom Simoneau. It’s about 20% old barrels, 80% new barrels. He has some similar wines from Patz & Hall from the early 2000s, “that are singing right now.” Dan Berger insists this will be better in an hour or two in a decanter, which suggests it would do very well in the cellar for a few years.

Tom mentions that it’s important to clean and dry a decanter. Dan even suggests his technique of using tiny little ball bearings to clean the bottom of a decanter, about 30, with hot water. The ball bearings take all the pigmentation off the glass that the wine has left.

Next is the 2017 Meritana La Rousse Pinot Noir. He likes the impact of new barrels on the right kind of Pinot Noir. He used about 1/3s whole cluster, to bring out the aromatics, then into about 75% new barrels. By 2018 he will have three single-vineyard designate Pinot Noirs.

Next they taste the Secret Door. The door will change with each release. On one label, the door is one that a friend of his took a picture of in northern India, the secret door into the ladies’ part of the palace. Another labels has a secret door to a park in Beijing. He wanted to make a Cabernet for his fiancée; he promised to make a Cab for her and this is it. It is 100% Cabernet, Sage Ridge vineyards, above Napa Valley. There are sage and bay leaf perfumes in the wine, and those are the plants that surround the vineyard. This Cabernet is $170 a bottle which is in the middle range for Napa Cabs.

Visit The Beverage People, online or at their store at 1845 Piner Rd. in Santa Rosa, CA, for everything you will need to make home brew beer, for holiday gifts and parties. Brew them now for the holidays, The Beverage People have all the ingredients and equipment and learning opportunities that you need to make beer, wine, cheese, how to cure olives, everything. Tom Simoneau remembers in the mid-’80s when he was just starting as a home winemaker, he was there a lot.