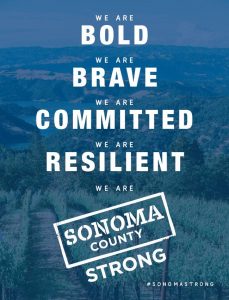 The first show since the fires opens with Steve Jaxon saying, “We are bold, we are brave, we are committed, we are resilient, we are Sonoma County Strong.” Steve welcomes Barry Herbst from Bottle Barn who says they have reopened, after being closed for a week. Dan Berger came out unscathed and Steve was evacuated two days but he is back home now.

Today’s special guest is Rene Byck from Paradise Ridge Winery, which was burned down in the fire. His house is fine, his staff is safe, his family is safe. He lost the entire 2017 vintage, about 7500 cases of wine, but they also stored a lot of their wines in Windsor, off site. Everyone has been very nice to them, wineries have reached out to help them and show their affection. They actually harvested some 2017 grapes.

The message he wants to put out is that Sonoma County is open for business. There are 470 wineries and the best way to support the community is not to stay away. Dan reminds us that the majority of the fruit this year had already been picked when the fires hit. It won’t be a horrible vintage. Everything was on target to make fabulous wine and those conditions are still present. 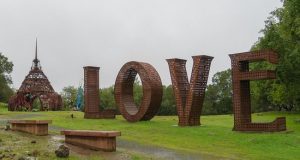 Steve is looking at the online USA Today article with a picture of the Love sculpture (ironically, from Burning Man) on the Paradise Ridge property. A lot of the big trees survived, most of the art survived, and the event center, tasting room and production facility can be rebuilt. He is confident they will do that. They have been showing art since they opened in 1994. His father was an art lover and they are proud of their outdoor sculpture collection. The winery is a popular location for weddings and the Love Sculpture is its most recognized symbol.

Steve asks Dan if he knows the number of wineries what suffered heavy losses and he says that about 20 were affected, and that the vineyards were mostly not damaged. Of course, some wineries were destroyed, such as Signorello in Napa Valley. Dan says some vineyards lost some vines but it’s possible to replant and have vines again in a couple of years.

Rene says that most of Paradise Ridge’s wine is sold direct to consumers, in the tasting room and through the wine club. He also wants to be sensitive to try to preserve as much of their staff at work as possible and that may depend on how quickly they can rebuild a tasting room.

Dan points out that their wine stock is kept in carefully controlled conditions and they are great shape. Dan says that Dan Barwick, their winemaker, has insights and a great palette, and his blends are brilliant. Dan says they are one of the few wineries that focus on acidity so they are nicely balanced, pair well with food and last long in the cellar.

Rene’s family bought the land in 1978 and they sold grapes, later in 1991 decided to make wine. Mr. Nagasawa was one of the first eight Japanese to immigrate to the US. In the 1870s they established the Fountain Grove area and they were a big winery at the turn of the 20th century. He hopes that some of his artifacts, especially a sword, are intact, but he has not been allowed back to the property yet so he doesn’t know. He hopes to have an exhibit to explain about Nagasawa. He says it is a sad sight but there are many others more greatly affected. He believes in the power of the community and the local government and Steve agrees that they will rebuild. Rene even thanks the radio station KSRO and Steve Jaxon for providing such good information during the crisis.