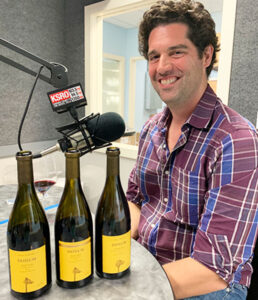 Donum Estate winemaker Dan Fishman joins Steve Jaxon and Dan Berger today in the studio on California Wine Country. This year Donum Estate celebrates 20 years of making Pinot Noir and Chardonnay. It was a spinoff of Buena Vista Winery. They sold, but kept their favorite ranch, called Tula Vista, that is down in Carneros. Donum is Latin for “gift” and means that wine is a gift from the land. Anne Moller-Racke came from Germany in 1981 as an investor and owner, trained with the best including André Tchelistcheff, and eventually as owner of Donum Ranch, began rennovating the vineyard. She became an expert vineyard manager and viticulturalist.

Today Dan Berger’s cellar wine is a 2007 Rosé that is rather dark, which was lost in his cellar. It looked like a red wine because he keeps the place so dark. He never intended to age it for 14 years.

They are tasting a 2019 Chardonnay, from the smaller of their two estate vineyards. They planted the vineyard in the late ‘90s. It’s barrell fermented, low percentage of new oak, great acid, Dan calls it “brilliant” and says it has a Burgundian backbone and California aromatics.

Donum Estates sells primarily direct to consumer through their website land they do in-person wine tastings too. They are located in the Carneros region on the Sonoma side, on a 200 acre ranch. They also have a spectacular outdoor art collection, with almost fifty outdoor sculptures. Come for a tasting and a tour for the best view of it. Plan ahead and book a walking or riding tour and a tasting.

Next they taste a 2020 Pinot Noir from Carneros, freshly bottled. It is a blend called Three Hills. It is a very young wine and will not be released until October 2022. The acidity is parallel to the Chardonnay, with “an underbelly that is unyielding.” It was critical to decide on the picking date, because the region is warmer now than it used to be. They used to harvest after Labor Day but now they pick all in August, in that first window of ripeness, when the fruit is fresh and the acidity is more present.

Following that, the third wine is from the Carneros reserve tier. There are only 50 cases of this wine. It is the 2020 East Slope Pinot Noir, the slope faces east and gets morning sun. It is a low pH high acid wine. Dan Berger detects a faint hint of cranberry. It needs an extra year before it is to be released.

All of their tastings are private, with a host and there are different tours, either walking or driving on ATVs. It is a spectacular place. From the top hill you can see the Bay and a bit of the San Francisco skyline. They are open daily.