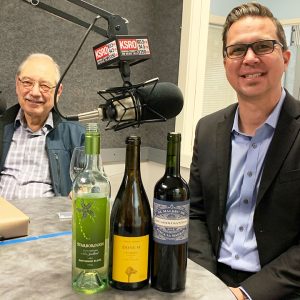 But first, as usual, we will open show with a tasting of a bottle from Dan Berger’s wine cellar. This one is a 2014 Sauvignon Blanc from the Starborough label, based in the Marlborough district of New Zealand. This Sauvignon Blanc ages well, as much as 12 years. This one has held up well, it still has some of the cilantro character that you find in these old wines. The screw top helps in its preservation because there is less oxygen than with corks.

The bottle has a slight green tint. Dan explains that if it were a clear bottle, the wine could be light-struck and it is a wise choice to use the green tint, which actually protects the wine from the effect of ambient UV light. There are some clear glass bottles with UV protectant, but they are more expensive and it is easier to use these light green tinted bottles. And speaking of screw caps, Dan Berger says only 2% of the wines in New Zealand are closed with corks.

Paul Mabray has been in the wine business for twenty years. He was the founder of Wine Direct and now pix.wine (“Pix dot wine”). He calls it the Google of wine. He makes it easy to find and buy wine for anyone searching for nearly any wine.

On the Pix.wine website there is an article about wine in Detroit that caught Steve Jaxon’s eye, since that is his hometown.

Pix.wine allows you to search wine, and to register to get news when the wine you want is available. They are funded by the wine industry. The company is a team of 24 people as of now and they found people with a blend of wine and tech experience. He calls it the dream team of wine. The site has 270,000 names of wines in its searchable database.

CEO Paul Mabray explains that Pix.wine is in the Beta phase of development, which means it is a work in progress. It has been online only for about a week and today is his first public conversation about it. They are still “working out kinks in Beta.” They will also release a mobile app but they decided to launch online first due to Covid.

Dan Berger appreciates that Paul has tapped into the ability to associate wines that are near your preferences, and allow you to make discoveries.

They taste the 2019 Donum Chardonnay from Sonoma County that Paul has brought. The image on the label is drawn from some sculptural works of the Chinese dissident artist Ai Weiwei. The Donum vineyard has a large sculpture garden and there is an exhibit of gigantic animal heads by Ai Weiwei which represent the years in the Chinese horosope.

The company was named by the #1 naming agency in the world Lexicon, located nearby in Marin, who also named Swiffer, Febreeze, Sonos, Blackberry and many others. They came up with “pix” which combines “picks” meaning choices and “pics” meaning pictures, since people will take pictures of labels and use label pics as identifiers.

Paul Mabray says that the wine industry needs a way to promote wine to younger generations, and that the industry needs tools to make wine more open, easy to discover and easier to understand.