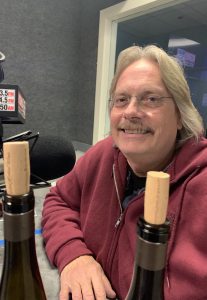 Before we start with Bob Cabral’s wines, Dan Berger has brought a bottle from his cellar. It’s a 12 year old Columbia Valley Riesling. Seven Hills is a small producer. This is only a little sweet, and the acidity held it together. Without the sugar it might be too bitter, but as it is, you can still taste the fruit. The acidity and vibrancy is what makes an older Riesling interesting. Dan Berger points out that Riesling is one of the only white wines that will age. Rieslings go well with Thai food, which sometimes uses sugar to temper the spices.

Bob Cabral’s name is synonymous with great pinot noir. He spent several years at Williams Selyem. He grew up in Escalon outside Modesto where his father grew grapes. He was strong in chemistry and biology. He thought of vet school but went to study viticulture at Fresno State and started working in 1980. This was his 42nd harvest in California and 35th in Sonoma County.

Now Bob Cabral is working at Three Sticks. After two decades at Williams Selyem, he left on good terms, wanting to do something else. They have access to some of the best fruit in Sonoma County. Ryan Pritchard is their winemaker, who was on this show last week. Bob is working in the vineyards, making sure they are healthy and that he is getting a good crop. Then in the winemaking process he wants to keep things simple. But today we will taste Bob Cabral wines, of his own production.

2017 Cuvée Wildflower, a Riesling which comes from two vineyards, one just outside of Occidental and another near Petaluma. It is fermented in a large concrete amphora. He uses no commercial yeast. He pays the growers extra to use as many sustainable practices as possible without losing the crop. This wine is dry, there is no residual sugar in it. Dan says this is a baby and needs a lot more time. Grapefruit, kiwi and kumquat flavors make it like a red wine.

Bob Cabral wines are available at the website and in a few fine local restaurants, such as Underwood in Graton. Dan Berger says that Bob Cabral’s wines are distinctive. He only makes about 140 or 150 cases of the Riesling. Bob describes how he dedicates his wine company’s profits to local charities and he also works with many other local charities like the Boys and Girls Club.

For all the wine he makes, Bob Cabral does not own any vineyards. It’s because he focussed on winemaking and taking care of other people’s vineyards. Such as, he planted the first three estate vineyards for Williams Selyem. He is still active in the winery but after all these years he knows it’s a young man’s game.

The 2016 Chardonnay is next, there were only 4 cases of it. Dan says it has two things going on, one is the aromatics, like a high-end French Burgundy, but the acid level reminds you of Chablis. The name of the wine is Cuvée Anne Rose, the names of his wife and daughter. It will be released probably in March or April of 2022. Dan Berger says the acid in this wine needs a lot of years in the cellar. Most people are already selling their 2020 Chardonnays, and this 2017 hasn’t even been released yet. Dan Berger would keep a Chardonnay for at least 7 years. Bob Cabral had a 60 year old wine that was great, because it had enough acid in the structure.

Bob Cabral Wines dot com includes Bob’s Cellar Playlist. You can listen to the Spotify playlist while you peruse the site. On the back of every label there is a coded song, written backwards. This is similar to what is in Clark Smith’s new book about wine and music.

The last wine is the Pinot Noir, the 2017 Troubador Pinot Noir, comes from four vineyards in the Russian River Valley, all in the area with the rich Goldridge soil, which he thinks adds a texture and mouth feel that nowhere else can deliver. Whole cluster, natural yeast, 60-70% new oak. He goes to France to harvest the trees, which are finished in Benicia, California. He has 3 different toast levels, depending on the wine he’s making.