Robert Larsen worked at Rodney Strong Vineyards. Now he runs The Larsen Projekt, a PR agency specialized in the wine business, representing Berryessa Gap Vineyards and ZAP, the Zinfandel Advocates and Producers. He was introduced to the Berryessa Gap Vineyards Zinfandel at “ZIN EX,” the Zin Experience in San Francisco, which is an annual ZAP event. He also produces some wine, such as a Grenache Rosé, as part of the Larsen Projekt, his own label.

Nicole Salengo says she got into wine “…by a process of elimination, it was the first job I didn’t get bored with.” She just completed her 14th harvest. She studied Geology and thought she would go to graduate school but found that work boring and got a job in a wine shop. She discovered she liked it and took classes at UC Davis extention, then completed their Winemaking Certificate program part time while working at another winery.

Berryessa Gap Vineyards is owned by the Martinez family. They are a fourth-generation farming family originally from Spain. They grow a lot of crops, not just grapes. They started a rootstock company for vines and they also grow fruits and nuts. The hills in their area had never been planted with grapes. They get cool winds in the evening coming off of Lake Berryessa which is about 5 miles away, after the hot days. 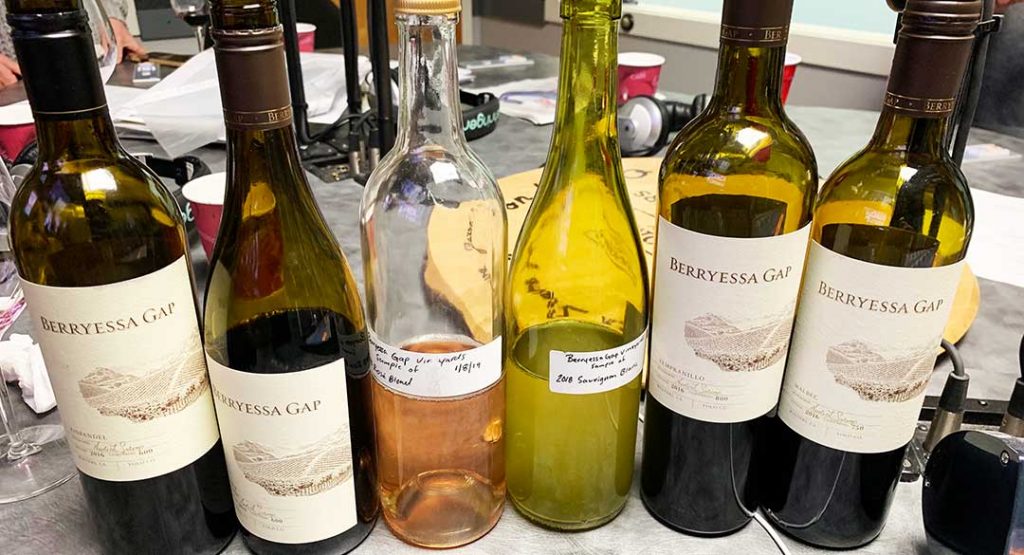 Dan says the location combines the great attributes of both cold climate and warm climate growing. The nighttime temperatures are low enough to allow for good acidity while the hot days allow for good ripening. It’s a perfect synthesis but it takes the right winemaking team to do it. Dan says it’s tricky to grow out there, especially if you harvest early. Nicole says that it’s a great area for Iberian whites like Verdejo, a white originally from Spain. Their winery is responsible for getting that name recognized by the TTB. They also grow some Albariño.

Next they taste a 2018 Sauvignon Blanc in a “shiner” which is pre-bottling. They will be bottling it next month, for now the label is handwritten. They put the blend together earlier this week. Dan says this wine has wild floral components but also a background of some herbal and citrus notes. He says if you hold onto the wine for a few years, there is a peppery flavor that will be more prominent. She picks it ultra-early, around 21 Brix, New Zealand style. Nicole did spend a season in New Zealand in 2013, before being hired at Berryessa.

Then they taste a dry Rosé, also in a “shiner” bottle. Dan remembers that they tasted some Rosés from the south of France, that were in the $30 range, but they weren’t dry. This one is really dry. The blend is Grenache, Barbera for acidity and some Primitivo (aka Zinfandel).

Next they taste a 2016 Tempranillo. What Dan likes about it is typically not aggressive in tannins. It is hard to predict how it ages but this may bear a few years. This variety is not grown much in California. Nicole says that Tempranillo matches the Spanish heritage of the winery. It’s one of their larger production reds. This one was just released in November. They have an annual Paella competition, the one big event they do, the first Saturday in November. Robert Larsen tells about seeing the huge paella pans in use there.

Nicole has travelled to all the places of origin of the wines they make. The Rioja Alta region was her favorite. It has similar climate and soil to here. The common qualities of the Tempranillos made there are earthiness, spice, arid climate, well-drained soil.

Dan admires the balanced acidity of all these wines. They have a couple of different clones in their vineyard. One is dark fruit, thick skin, high tanin. The other is more rose petal, fruit-forward with more acidic finish.

Nicole Salengo always liked a variety of flavors and was interested in the lesser-known wines, and that led her to the Spanish varietals that are not as well known here.

Dan says that their Malbec was harvested early enough to get graphite flavors and black olive flavors, more of the “blue fruit” and than the “red fruit.” Nicole says this is the climate here, and it can change from month to month. The Malbec is the biggest seller out of the tasting room. Dan says it has, “all these nuances of flavor you don’t see in fruit that was harvested too late.”

The 2016 Zinfandel is Dan’s favorite today, “really a knockout.” He likes it because it has some delicacy to it, like a Claret. Nicole says it is 100% true to the variety: “Sometimes you want to blend in a darker variety to add color and weight, but I am trying to preserve what our vineyard is giving us and I think that is how you get that true aroma.” Dan says the red raspberry mid-palette and the after-taste with a little minerality and some delicate spice make a beautiful wine. “I didn’t think I liked Zinfandel until I started working here,” says Nicole. Dan says, “This is almost a Beaujolais style, with concentration but no overt over-ripeness.”