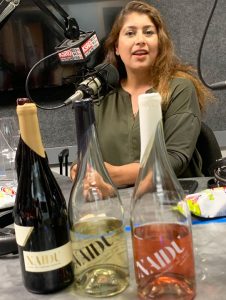 Raghni Naidu, owner of Naidu Wines, is our guest on California Wine Country with Steve Jaxon and Dan Berger. Harry Duke is sitting in for Steve Jaxon and Barry Herbst is also in the studio today.

To begin, Dan Berger has brought a 2021 Allan Scott Sauvignon Blanc from New Zealand. It was harvested in February, sells for about $15 a bottle and it is excellent. Allan Scott is known as the Marlborough Man, because in 1973 he planted the first Sauvignon Blanc in New Zealand, particularly in the Marlborough region. It has flavors of lime and is rich without being too sweet, but there is only a trace of sugar. “It has perfect structure,” says Dan Berger. The lime character is a function of their cold temperatures at night, and winds that go east to west. It is a two-and-one-half hour drive from end to end of the island, so the vines have coastal influences on both sides of it. In that way it does not resemble Californian SVs very much.

Raghni Naidu was born and brought up in India. She tells her story on this page of her website. Her parents were very enthusiastic about entertaining guests at home. Her mother would bring seeds back home from her travels, and the fruits would end up on their tables with guests. This had an important influence on her. In 2000 she went to Melbourne to study, where she also met her husband. After they got married they moved to the United States, to the Bay Area. They lived in the city, raised a family and took many visits to wine country. In 2018 they were on a road trip from Monte Carlo to Barcelona. She loved everything about Provence and decided to have that in their lives, back in California. Three months later they purchased a vineyard property in Sebastopol from an Italian American gentleman who had the vineyard for 45 years. Soon after purchase, she realized it was not just a house and a farm, but collectively a very special place that she associated with the joy she felt growing up in her family.

Barry Herbst notes that the property was already known for producing great fruit that was going to several single-vineyard labels. Raghni describes her personal commitment to the quality of Naidu Wines and she wants to do the best she can in showcasing it. She also mentions later that her winemaker, Matt Duffy, was already making wine for the previous property owner and has a lot of experience.

Despite the pandemic, she launched her wines on time during 2020. This year, they released their Viognier, a Rosé of Pinot Noir and their estate Pinot Noir. Her wines have gained some early recognition and awards that she describes.

They begin tasting the 2020 Viognier. Barry likes it for being restrained and dry, bright and clean, while some other Viogniers get boring and cloying. Dan says this is “flower basket” which is ideal for Viognier. Chris can’t add anything to what the experts have said, but he suggests a musical comparison. It suggests Mozart, not jolly fun light-hearted Mozart, but the darker Mozart, such as the Fantasy for solo piano K. 397. Dan Berger suggests he hears Debussy and Chris thinks maybe the Prélude called Puck’s Dance.

Raghni says that even as an outsider, the challenges of making wine are the same for her and everyone else in the business, so she feels that unites them and makes her feel the same as any other. She also wants her customers to have a personal experience with the wine that is an expression of who she is as a person.

Barry Herbst tells about Bottle Barn, where most of the center of the store is full of Rosé. The harvest fair is 3rd week of September, and the winners will be in the store the following week.

Dan Berger suggests a Portuguese wine called Post Scriptum, from the Douro region. It is a dark red wine and Dan says it is excellent.

The next wine is the Rosé, that Barry says is serious, a substantial Rosé that is clean, balanced and full-bodied for a Rosé, with a lot of complexity. Dan Berger suggests it would be great to accompany poached salmon, and the wine should not be cold. The difference  between grilled and poached salmon is that the wine wants a more delicate flavor.

Then they taste the Pinot Noir, cherry, dark raspberry and a trace of forrest floor character. The wine has density and delicacy at the same time. Dan says it’s rich but not clumsy.

Chris takes a moment to listen to the wine and figure out what key it’s in.* He suggests this wine resembles Brahms, Rhapsody Opus 79 N.1, which alternates between complex, rich and dark textures, without being heavy, and other sections where the music is quiet and delicate. Harry Duke thinks maybe the Opus 79 N.2, instead. (Here are both Rhapsodies, for anyone to decide which they prefer.) Brahms can balance quiet delicacy against passages where both hands are playing full-fisted chords that keep a pianist very busy, and this wine seems that way to Chris.

Naidu Wines is not really open for tastings but people can book the house for overnight stays, for a very private, intimate experience. They are located in the Blucher Valley is just south-west of Sebastopol. The area does not have many homes. Kendall-Jackson has 400 acres of Pinot Noir planted nearby.

*Editor’s note: this is a highly specialized skill that requires years of training, drinking and listening.