Nick Goldschmidt of Goldschmidt Vineyards is back on California Wine Country with Steve Jaxon and Dan Berger today, to talk about New Zealand wines and more. Dan Berger notes that New Zealand has made a great impression in the wine world in just the last couple of years. Several new vineyards and wineries there are producing wine that is as good as the wine make anywhere, especially of certain varieties that grow very well there. 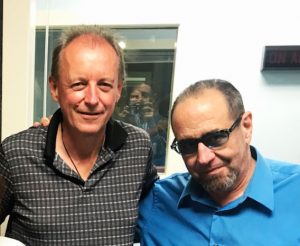 Nick Goldschmidt has made wine in many places. He grew up in New Zealand, lived in Australia, then lived in Chile and Argentina and now lives in Healdsburg. Holding four degrees, he started in Engineering then went into Organics and Biodynamics in ‘82, then in ’84 Viticulture in Australia then in ’86 he did post-grad enology. He came to California in 1990 and got a winemaker job at Simi. “They hired a Kiwi at Simi,” at the age of 28.

His big break came in 1992 when they made him the still wine maker at Louis Vuitton wines. They had many winers around the world and that is what started him on his career. He left Constellation for the second time in 2011. In 2008 he went out on his own and he consults 26 wineries in 6 countries and they own wineries in 4 countries. He is also an inventor with patents in wine production technology.

Dan notes that this comes from the science background that a lot of winemakers have. Without that, it’s difficult to become a great winemaker. Dan remarks that there is great scientific literature about wine being published in many places, such as Bulgaria, where they produce a lot of grapes.

Today Nick Goldschmidt has brought some New Zealand and California wines. First they taste a Marlborough Sauvignon Blanc, called Forefathers. When he started making wine in New Zealand, he wondered why go there to make all the same types as in other places. The vineyard is named Waxie (“wax-eye”) after the birds that are abundant there. Considering the export market, the British like Sauvignon Blanc that favors acidity and cut grass but most New Zealanders like his technique that brings out a little more floral aromas, not so austere, says Dan.

Another of his wines, Echo Bay, just won the sweepstakes award for best white wine in the entire show at Dan Berger’s International Wine Competition earlier today. There were 31 judges and 19 votes for this wine, while no other wine got more than 6. The results will be out in a couple days. They had 128 triple gold winners. Next week they will recap the winners.

90% of his consulting is outside of the US. He doesn’t stay in hotels, but stays with the client. He does not simply imprint the American way of winemaking. Instead, he looks for ways to make wine that is appropriate to the area. Steve remarks that it is a unique Sauvignon Blanc, which has to have that herbal flavor, which is what makes Sauvignon Blanc. Dan says the wine should tell you its story.

Next they taste the 2016 Goldschmidt Chardonnay called Singing Tree. Nick says it’s hard to find the old Chardonnay vineyards since lots were pulled out due to phylloxera in the 1990s. He didn’t want to make a Chard that tasted like everyone else’s. It’s an old field selection, not a clone. It has low yield but it is on a sandy loam soil and phylloxera can’t grow there. It gives much more extremities of fruit flavors.

Dan likes the integration of acid with the subtle oak component that gives a sweeter aftertaste without any sugar at all. Dan thinks the fruit is so good that more than two or three years of aging would be too much.

Nick Goldschmidt is in California for the critical times of the year for local production but he also follows the southern hemisphere cycle. Nick has been working in Chile for thirty years and describes the wine culture there.

Dan explains that Nick has had a very interesting career. Simi Winery was in the forefront of quality back when he was there. He was even making Semillon and Steve mentions that he uses Semillon to blend a little into his Merlots. Steve says that the secret to the Katherine wine is that he knows it so well, since it was planted in 1982 and he has seen the vineyard evolve since 1990. He says it’s important to support small family producers who are making interesting wines. It’s key to keeping interest alive. Dan adds that it’s also key to support the “orphan” varieties. They have a whole different flavor profile and it is important to support local varieties and their uniqueness.

Nick Goldschmidt is about to launch some unique wines from his “office” which is what he calls his tasting room, which is by appointment. He has started a YouTube channel with about 50 educational videos. Nick Goldschmidt feels blessed that he came to America and is able to do what he wanted to do in the wine business.