Adam Lee from Siduri Wines and Sam Lando from Lando Wines join Steve Jaxon and Dan Berger today, Barry Herbst is also in the studio. Adam begins by telling how he and his wife started Siduri Wines in 1994 with $24,000 and produced 107 cases in their first year. They took a sample to a wine writer who liked the wine and got them some press. They grew the winery from there up to about 25,000 cases per year, with grapes coming from as far north as Oregon and as far south as Santa Barbara. He had never studied winemaking. He had worked in wine retail but had no experience when he started. He took one class to learn his lab techniques.

Sam tells that Lando Wines have been around since the 2012 vintage but he has been in the wine business for more than 20 years. They only sell wine twice a year for three weeks, in the Spring and again in the Fall. 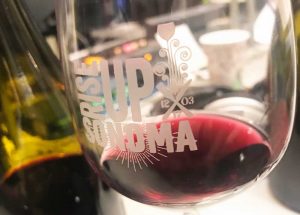 They are one of the unfortunate winemakers who had his entire 2016 vintage “sleeping gracefully” up at Paradise Ridge, which was heavily damaged in the October fires. He tells the story of how much solidarity he gets from the other winemakers in Sonoma County after the fires. He sent an email to about 18 of his closest colleagues, asking to buy some barrels of wine from the region, which he would use to make a special edition bottling, in commemoration of the lost vintage. He would call it the “Phoenix Blend.” He heard from everyone in a few hours and they all had 2 or 3 barrels for him. The discussions about Rise Up Sonoma soon followed.

Speaking of Siduri and Lando, Dan talks about how the greatest development in the last 15 years in Sonoma County has been the emergence of Pinot Noir as an iconic variety of the area. Sonoma County has done so well with it. Napa County produces great Cabernet Sauvignon and they make some good Pinot Noir in the Carneros regions. But Pinot Noir is Sonoma County’s claim to fame. Siduri has done such a good job of capturing the flavors of the whole west coast, with all of his vineyard designates. Dan is impressed with the Pinot Noir coming from this county and Siduri and Lando are at the pinnacle of that production.

Adam brought a sparkling wine of her production, called Flaunt. IT’s half Pinot Noir, half Chardonnay. It is brut style, very dry, with some wonderful flavors.  Dan says it will age beautifully, as it has great structure. It is really dry. “It’s going to be fabulous in about 5 years,” says Dan.

Steve describes Rise Up Sonoma, https://www.riseupsonoma.org/ a special fund raising event to be held at the Jackson Theater at Sonoma Country Day School, Sunday Dec. 3 at 4pm, a few days after this show aired live. There were 30 exclusive dine and wine stations at the event featuring the best chefs in the Bay Area. They will raise money for relief efforts after the October fires in Sonoma County and nearby areas.

Sam talks about how it came together. 2 years ago they did a similar charity event. When they get to enjoy a good experience and have contributions go to a positive cause, it is very satisfying. To bring this caliber of chef and wineries together is a big deal and doesn’t happen very often. These are James Beard and Michelin rated chefs from San Francisco who will be working with their friends in the wine business who are of the same caliber of fame and accomplishment. They also have musician Donovan Frankenritter performing and there are also 30 farmers who will be at Rise Up Sonoma. And it has been organized in a few weeks. The Green Room, the VIP room, will have special musical talent and a hosted caviar and foie gras station, with exclusive wines. He can’t talk about the other celebrity chef who will be there.

Steve mentions that he knows that his friend Guy Fieri will be there, and another major celebrity chef as well. (Steve has known Guy since ‘96 when he opened Johnny Garlic’s next door to KSRO, the radio station where California Wine Country is produced live every Wednesday at 5pm).

Dan also wants to know about Adam’s project for the following weekend. He will have an open house at Siduri Wines, from 11-4. They pour 20 or more wines, with Pinot Noir from Oregon to Santa Barbara, and it’s free. 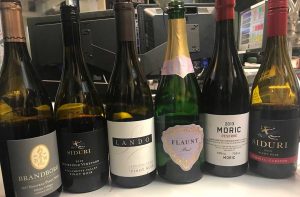 Next they taste the Lando Wines 2015 Sonoma Coast Pinot Noir. They only sell wine for 3 weeks in Spring and 3 weeks in the Fall. Dan calls it “a little tight, a little backward so far, cranberry as the primary aromatic, cries out for some rare roast beef.” Dan thinks it has great acidity, and would only cellar it for about 2-3 years. You just need to decant it for an hour or two. Don’t serve it with something heavily aromatic. For instance, if you put this with lamb with garlic and rosemary, the wine would be overcome. The acidity distinguishes Sonoma Coast from Russian River Valley. It retails for $45 a bottle, which Dan says is “too cheap.”

The next tasting is a Brandborg Cellars Beaujolais from Oregon, a new 2017. This wine is like silk and not for cellaring. Steve asks Dan to tell about Beaujolais, which he says is usually made from Gamay Noir, but this is 100% Pinot Noir, from Terry Brandborg’s estate property in the Umqua Valley in southern Oregon.

They describe the winemakers and chefs who will collaborate on Rise Up Sonoma. They wanted it to be a superb top-notch event, but not snooty at all, although the price tag is high enough to raise a significant amount of money for the cause. Plus they will have a silent auction.

Next, they taste more Pinot Noir from Oregon. Dan talks about wine growing regions in Oregon, Applegate Valley and Umqua Valley. Dan says that Oregon has a very interesting future in wine. He says that his first article in 1976 was about the first four wineries in Oregon. Obviously he says it has come a long way and Oregon is pre-eminent in Pinot Noir production. Pinot and Rieslings are coming from Oregon.  He started making wine with Oregon grapes in 1995.

Dan also notes that Pinot Blanc and Rieslings are coming from Oregon. Sam Lando asks Adam what is the main difference between Oregon. He says there’s more red fruit up in Oregon. In the past, there was more inconsistency vintage to vintage. That has changed now and Oregon producers are making very good wines consistently year to year.

Adam explains that in Oregon, the length of daylight is different, they get an extra hour of sunshine in the summer in the morning and evening. So that gives a different flavor profile, because it gets the same amount of sunshine hours in fewer days. Dan says that it can make for lower alcohol, which leads to expansion of aromatics. From a growing conditions point of view, it’s all dry farmed, which is rare in CA but you can get just enough rain in Oregon that it keeps the vines going. Steve agrees it’s a good food wine.

Now they will give away four ticket to Rise Up Sonoma, to some callers. The first is Tony in Santa Rosa, who lost his home in Larkfield to the fire. The next caller is Judy in Windsor, whose house was spared but who was evacuated for a long time. She says about Siduri that she never liked Pinot Noir until she started going to Siduri to taste the various flavors that this variety can produce. Then Dolores in Santa Rosa comes on and says she has chills just thinking about attending Rise Up Sonoma. The final caller is Richard in Santa Rosa, who lost his home in the fires and who is focussing on rebuilding.

Steve says that soon they taste and discuss some wines for the holiday season. Dan notes that Bottle Barn has stocked some of the greatest Rosés he has ever tasted. There is already a 2017 Rosé on the market, from South Africa. He says the collection is impressive and the wines are still available at better prices than ever. Barry says this year has seen the highest Rosé sales they have ever had.