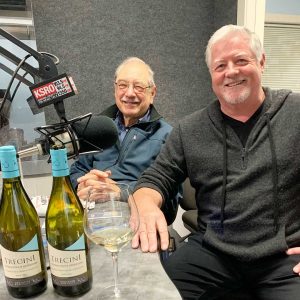 Dan and Dan, Berger and Barwick.

Dan Barwick, winemaker at Trecini Winery, is back on California Wine Country with Steve Jaxon, Harry Duke and Dan Berger. He has been a guest on this show a few other times, most recently on January 12, 2022, and before that on this episode of July 21, 2021.

Dan Barwik’s first job was at Harrod’s in London. At the age of 19 he worked in the food halls, starting in the meat department. From there he worked in management and in the wine department during a promotion of French products. His job was to make sure each tasting had the right wine, glasses etc. so he got to taste all the wine and there were hundreds. Dan Barwick has worked in Sonoma County at many wineries including Matanzas Creek, Ferrari-Carano andParadise Ridge. Later he started Trecini with John Vicini in 1999. Dan Berger admires their wine because they are focused on good acidity.

Dan’s Cellar Dweller of the Week

Dan Berger’s cellar wine this week is a 2007 Merlot from Twomey. Merlot got such a bad vibe from that movie but some Merlot if it was grown and made right is as good as anything else. The secret to this is 13.6 ABV. The higher alcohol wines don’t age as well. It still has vibrant fruit and the acid is still there. Dan Barwik reminds us that the acidity comes from picking at the right time, once ripe but not too ripe.

Trecini also makes some wine in Italy and today’s show features some of those Italian Trecini wines that Dan Barwik makes. They begin with a Sardinian Vermentino from 2020. Vermentin0 is a crisp, bright, refreshing wine, that can be still or slightly bubbly. They sell it at the tasting room in downtown Santa Rosa located at 684 Seventh Street, on the corner of Seventh and Humboldt.  They are open Friday, Saturday and Sunday for tastings and walk-in retail purchases.  The Trecini California wines are some of the best value locally since they own all their own vineyards locally. They have a wonderful lineup of Californian and Italian wines, says Dan Berger. They have collected a lot of gold medals. These wines have delicacy and go well with food. The grapes are picked early enough to save the varietal character and acidity. The more it ripens, the more homogeneous the wine becomes.

Sardinia is located in the Mediterranean west of Italy, south of Corsica and well north of Sicily. It is one of the 20 Regions of Italy. It resembles the American south-west so much that it was used as background for all of those “spaghetti westerns” of the 1960s that launched Clint Eastwood and Eli Wallach. The vines have ancient rootstocks common only in the Mediterranean. It is very hot and arid. There is beautiful coastline, excellent fishing, snorkeling, swimming and sailing, and also has some very high-end ports and resorts up in the northeast corner.

Next they taste a Moscato, which is sweet and usually served as a dessert wine. The label says 5% although it tastes more like 10%. If you like sweet wines, this is delicious, has good vibrancy and bright flavor.