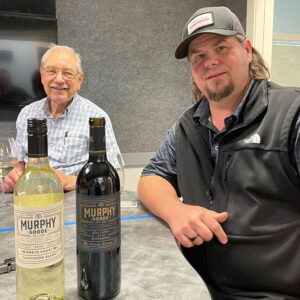 Dave Ready Jr., winemaker at Murphy-Goode, is our guest on California Wine Country today. Harry Duke is sitting in for Steve Jaxon and Dan Berger is also in the studio.

Dave’s father was part of the team that founded Murphy-Goode in the 1980s. At the time their wines were based on vineyards managed by Tim Murphy and Dale Goode. Dave Ready Jr. is now the winemaker. The founders met at a new year’s eve party in the mid-’80s. His father loved golf and would just as well put a golf course on the property.

After his father returned from Vietnam in the late ’60s, he went to college and met a friend who knew about wine. They started a wine tasting group, which was rare for back then. His father then founded a company that was the only distributor in Minnesota for premium California wines. So he had a vast network and a successful business.

The Long and Winding Road that leads to Wine

When Dave was visiting California, he called his dad who was based in wine country. His father suggested he get a job, after he had spent the summer seeing the Grateful Dead. So he worked the harvest in 1988. It paid $7 an hour and at the time for him it was a chance to stay in California and to be able to see concerts in California. After the 1989 harvest he enjoyed it more and started to stick around. He decided to stay in the wine industry, thinking it might be in sales, same as his father. “He used golf as a sales tool.” Once he decided he wanted to do this, he took courses at UC Davis and got a series of jobs. His band, Mango Jam, was a lot of fun.

This week Dan Berger has brought in another wine he completely forgot that he had. It is a 2008 Bogle Riesling, from their small production or Riesling. “This wine is over the hill but you can’t really kill Riesling…” Dan Berger describes how the maturity of it comes from the “petroleum” component that older Rieslings have, gives it character. Dave Ready Jr. knows the winemaker, Eric Aafedt.

Dan Berger tells the story of Dale Goode and Tim Murphy, who were pioneers, in the ’80s who really knew how to match varieties to land in the Alexander Valley well before other people realized its potential. He also tells how they never rested on their laurels, they were always looking for ways to make their wines better and better. Dan Berger tasted an Alexander Valley Cabernet in 1976 and had not heard of Alexander Valley. The Chateau Montelena that won the Judgement of Paris was an Alexander Valley wine.

Some of their fruit does not come from Alexander Valley, however. The fruit comes from Monterey and Santa Barbara. Since they sold Murphy-Goode to Jackson Family Wines, they have access to great vineyards all over California. This Chardonnay is about 75% steel and 25% oak. He thinks that even if the oaky flavors are not part of the variety, it is so common that people expect it. Dan Berger likes its freshness. This is a 2020. They will bottle the 2021 on Friday. Dave says he is going for a Chardonnay that would be like an after-work cocktail, fresh and refreshing for drinking and pure enjoyment.

Dave also describes a very interesting initiative called A Really Goode Job, where they offer an incredibly generous package to one lucky winner for a full time job with a great salary and a place to live among the vineyards. The company has hired some extraordinary people and this year they are doing it again. The application is a 60-90 second video explaining why you want the job. Last year they had 7,000 applicants.

Before the end of the show they taste the 2020 Murphy-Goode Sauvignon Blanc and a very well-informed discussion of residual sugar ensues. Finally they taste a fascinating 2018 Murphy-Goode Zinfandel, called Liar’s Dice. Also this one, the fruit comes from Alexander Valley. Dave blends from 2-4 percent Petit Syrah “to give it a little extra backbone,” and “it has a nice jammyness to it.”