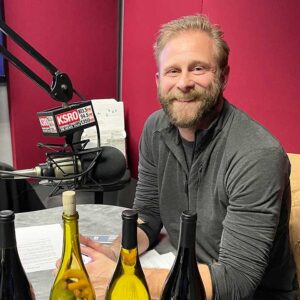 The name VML comes from the name of their founding winemaker Virginia Murray Lambrick, who retired in 2018 and who was Ross Reedy’s mentor. He started there in 2012 “dragging hoses” happily doing grunt work and working his way up.

While tasting the 2021 Chardonnay blend that he made, he describes it as elegant and crisp with honeycomb, caramel and orange peel. It used about 30-33% new French oak. It’s 90% Russian River Valley and 10% Alexander Valley.

After that they taste another, a single vineyard Chardonnay. Making wine with his father in their garage got him interested at first. He attended Cal Poly San Luis Obispo for viticulture. He worked in Paso Robles for some winemakers and also traveled to Napa Valley and Australia, Argentina and New Zealand. Through all the jokes, it’s clear that he loves his work.

Next they taste a Kent Ritchie Russian River Chardonnay, picked it a bit early so it has strong minerality is what they were striving for.

VML and Truett Hurst share a tasting room at 5610 Dry Creek Road in Healdsburg. Enter KSRO at their website as a discount code for a free cheese pairing at your tasting.

One of their tastings, The Celestial, featuring five wines from the Russian River Valley. The wines emphasize all the cardinal points around the territory: the Sun, the Earth, Moon and Stars. They are all Pinot Noir blends. The Stars  the western influenced one. The Moon is balanced between coastal and inland. The Earth would be the big fruity bold jammy Pinot Noir. Taste whatever side of the spectrum you like. Get their wines in the tasting room in Healdsburg or at the website.