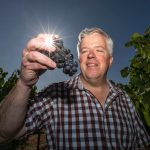 Tom Simoneau is back on California Wine Country with Steve Jaxon and Dan Berger today and he has brought a guest, Adam Lee, the winemaker at Clarice Wine Company. He was the founding winemaker at Siduri and Clarice is his own project that he launched after that experience.

Adam Lee begins by describing his experience in the wine business, beginning with jobs in retail and wholesale of wine, starting after college. He majored in History and studied the French Revolution. He also worked in restaurants. When he moved to California he made 107 cases of wine his first year here. He tells the story of bringing some wine to Robert Parker and he managed to start Siduri out of that and he got up to 35,000 cases and sold it to the Jackson family. He still works with the Siduri winery. But a few years after he left Siduri, he started Clarice. He named the winery after his grandmother who was born in 1896 in Giddings, Texas. She used to cook in a crock pot and used to say if you make a stew over 8 hours, the flavors blend together, but if you add something late in the cooking, the flavor stands out. He has applied that principle to his winemaking and describes making field blends of his Pinot. Steve also introduces Morét, the Clarice general manager, who describes her own wine project.

Today is July 14, Bastille Day, and Dan Berger notes that the changes in primogeniture laws affected properties in Burgundy but not on Bordeaux.

They begin tasting a 2011 Swiftwater Cellars Zephyr Hills Chardonnay, from Dan’s cellar, made by his friend Linda Trotta. She is now winemaker at Jameson Ridge in Napa. Tom Simoneau says he would never guess that this wine is ten years old.  Adam Lee says that we don’t think of aging white wines. Then they taste Tom Simoneau’s Chardonnay, the Brenda Lee Chardonnay, this is the 2019, their newest. It’s 100% Chardonnay, wild yeast fermented, all from the Brenda Lee vineyard, planted with 9 different clones. Only 20% ML, since it’s Alexander Valley AVA, it’s a warm region and he does not need to soften the acidity, the fruit is all up front. The vineyard was planted in 1972. Dan Berger says that 3 or 4 years is plenty. Tom Simoneau sells wine only direct-to-consumer.

Adam Lee finds making white wine to be like baking, which requires exactness, and so it’s more challenging than red wine, which is more forgiving and that he compares to cooking, rather than baking.

They taste the Clarice 2018 Rosella’s Pinot from Monterey County. which is completely natural, no added sugar or yeast. Dan Berger says, “…you can smell the place…” and compares it to an empty nutmeg jar. Adam Lee describes the history of the vineyard and how he makes the wine differently now that the vineyard is older. Tom Simoneau reminds us that Clarice has a tiny production so if you’re interested, get ’em now!

The vineyards are in Monterey County but Adam Lee makes his wine in Sonoma County which is where he lives. He makes the Clarice in Sugarloaf, across from Oakmont, and he makes the Beaumarchais wines up in Healdsburg.

Pierre Beaumarchais was the author of the Marriage of Figaro and the Barber of Seville, and he was also active in supporting the American Revolution.

Adam Lee feels closest to Pinot Noir so he has made that his specialty. Tom notes that these wines are different, though they all come from the central coast.