This podcast episode is a repeat of the show from March 22, 2017, with Tim Bell, winemaker at Dry Creek Vineyard. (This week’s live radio show has been pre-empted by a Golden State Warrior’s basketball game on our home station KSRO.) 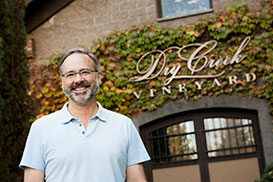 The first tasting is a Rosé from Bonny Doon Vineyards in Santa Cruz. Dry Creek Vineyards was celebrating their 45th anniversary (last year when the show was recorded). Today they will celebrate with tastings of their Chenin Blanc, Sauvignon Blanc, a Zinfandel and a blended red.

First, Dan Berger opens a bottle of A Proper Pink, a rosé produced by Randall Graham, owner and “king for life” of Bonny Doon Vineyard in Santa Cruz. It is a slightly sweet Rosé, made with 69% Tannat and 31% Cabernet Franc. Dan explains that to make Rosé you have to get the skins out of the juice pretty quickly.

Steve asked Tim Bell to describe how he got into the wine business. He grew up in Southern California and worked for the Liquor Barn chain and got interested in wine. He studied winemaking at UC Davis, graduated in 1994 and did an internship at Gloria Ferrer, then worked at a few different wineries including Freemark Abbey, for 10 years. Now he has been at Dry Creek for 6 years, since 2011

Chenin Blanc: Dan says this is the best Chenin Blanc he has ever tasted. Chenin Blanc to be popular in California but today only a few thousand acres of it remain, mostly for jug wine. It is dry, has beautiful melon fruit and subtle spices of green tea. Dan points out that chilling this wine covers the sugars and gives it a weightiness from the sugar which shows up as texture rather than as sweetness.

When talking to somelliers in restaurants, Dan discovered that that patrons who ordered Sauvignon Blanc ended up spending more money on their checks because they would order two bottles.

Steve asks Dan to sum up the history of Dry Creek. When David Stare planted Sauvignon Blanc, he discovered it was an ideal place for it to grow. Pedroncelli was another pioneer, with Zinfandel. The Dry Creek area was important for home wine making during Prohibition. Since in certain states it was illegal to make wine even at home, they shipped “wine bricks” with “warnings” saying, “do not add 30 gallons of water and some sugar or else this will ferment.”

2014 Old Vine Zinfandel: This grape ripens unevenly and Tim says this contributes to its unique flavor. Dan finds flavors of black pepper and mocha, not woody, but cocoa-like and black cherry and raspberry. Steve finds that it is smooth, and doesn’t “slap him in the face” like some Zins. Dan says there is a handful of California Zins that deliver this kind of fruit in the $60 range, but this one sells for $38, a great bargain.

2013 The Mariner, a Bordeaux-inspired blend. Tim says the wine changes from year to year, based on the best available grapes. 2013 was an intense vintage for the Bordeaux reds, dark with lots of tannins. So this time he used more Malbec than usual, because it is softer and rounded out the profile. Dan says this is the wine to have with a steak. It’s big and bold but doesn’t have overripe characteristics. It has a Claret-like finish and reminds him of a Bordeaux in the aftertastes. He says it is delicious but would lay it down for 10 to 15 years, even 20. It has beautiful structure and good acidity and is “…structured to go the distance.”

Tim says the winery is getting ready to release some Cabernet Franc, which Dan wants to taste when it’s ready. Dan says that Dry Creek Vineyard and Tim Bell have a real success story, even if Dry Creek does not have a flashy reputation as it deserves to have.