Diane and John Bucher from Bucher Wines are back on California Wine Country with Steve Jaxon and Dan Berger. 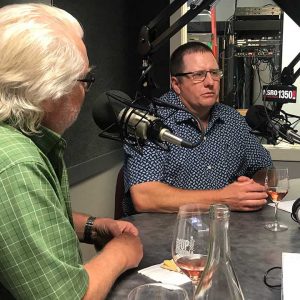 John’s father Joe immigrated from Switzerland in the early 1950s and worked in the dairy industry. They have been in the Russian River Valley since then. The true story is that John’s father delivered 10 cubic yards manure to Tom Simoneau and his wife’s ranch, for their vegetable gardens. They have known each other since the time of the first delivery. The Buchers make compost which they sell to landscape companies and to vineyard management companies. They compost that with some humus from the vineyard and put it back on the ground in the vineyards. He called it Bucher Gold. They still have 700 cows that they milk twice a day. They treat the manure to make a useful mulch. They sell a lot of it to local landscape companies and other vineyards and growers.

They are tasting a 2017 Bucher Rosé of Pinot Noir from Russian River Valley. Diane tells that it’s 100% from the 777 clone. Their winemaker is Adam Lee of Siduri Wines. They originally made their wines at Siduri and Adam has stayed on as their consulting winemaker. They age it about 7 months in neutral French oak, so they get some roundness and cherries and wild strawberries. Dan Berger calls it really ripe, chewy and flavorful, with a nice watermelon aftertaste. It retails for $25.

John’s father Joe grew up on a dairy farm in Switzerland and his cousin still operates the farm, outside of Lucerne, Switzerland. They have been there for 125 years and 60 years in California. When his father came over he worked in agriculture and other jobs, and visited Sonoma County. When he had a chance to buy a property there he did that in 1958. He started with 50 cows and grew to about 400 cows by the time he came home from college. Then it grew to 800 cows. In the mid-2000s they converted to organic dairy farming.

There were big changes in the dairy business in the early -mid 1990s and before organic was on the radar. They planted starting in the mid 1990s and how they have 40 acres, mostly Pinot Noir and some Chardonnay.

Now they taste a Rosé, Tom calls it crisp, delicate and dry, and says that it would pair with any kind of tasty food. Tom calls this one of the best Rosés he knows. Diane explains how they pick it at really low sugars, only about 13.5% alcohol, in the French tradition. It is made to be a Rosé.

Steve gives the URL bucher.wine (and a digression about cow poop and politics). They taste a 2017 Bucher Chardonnay, unoaked. Tom tells about the clones. They make about 1300 cases, a tiny production. Tom says the unoaked Chardonnay is popular now. Dan thinks it could be cellared for another 2 or 3 years. Barry says he gets enough people asking for it at Bottle Barn that he will make a separate section for it. Steve says that he wanted the buttery flavors but now he likes the sharper style. This Chardonnay is 100% Wente clone, from the Wente winery at Livermore. The clusters and berries are relatively small so there is more skin per unit of juice.

They taste the 2015 Rio Oro Chardonnay. It is close to the Russian River in the Middle Reach neighborhood of the Russian River Valley. This one shows why Dan likes to lay these bottled down. It’s two years old and Dan says it should get another 3 years at least. Tom says most of the cool region Chards get 100% ML. Barry says it is gaining length and mouth feel as it warms up. It has great body and reminds him of the saying that Chardonnay is like red wine with no color.

Barry has brought some wines too. First, there is a Saini Sauvignon Blanc. Dan suggests decanting it to get some of the Dry Creek Valley grassy component, which he says will come out sooner if decanted. Then he has a Chilean Cabernet Sauvignon, from a small producer named Perez Cruz, this is his reserve bottling. They all agree that it can be drunk cool, especially in the summer. Dan says it is very drinkable now and could stand a year more in the bottle, but it’s just enough to decant it. Any kind of pitcher will work, anything that gets air into the wine. Barry will even put his thumb over the top of the bottle and then shake the bottle, that works fine too.

The next Pinot Noir is the 2015 Bucher Wines Vineyard Designate. Diane explains how they source from about 10 different blocks, and seven clones. They can blend those wines for aromatics, mouth feel and finish. Most of it is open top fermented. Tom suggests they compare the last two wines and notices the difference immediately. Dan notices a little forest floor, dried leaves component. It has the classic Russian River Valley characteristics. They also taste cherries. Tom asks how they manage the picking at harvest time at Bucher Wines. All the blocks are marked by number, and each winemaker knows where their fruit is. John says it’s the most representative wine of their production. They harvest and blend separately and blend later. They have two more Pinot Noirs to taste.

Diane tells about the new Bucher Wines winemaking facility, 30,000 square feet, perfectly sized for their small lot production, with 10 smaller fermenters, called Grand Cru Custom Crush. Tom explains the new concept of shared winemaking facility that allows Bucher Wines to have tasting on the premises. THere are 5 separate tasting rooms there. Bucher Wines can also do bigger events or winemaker dinners. Their open house is July 7. To attend, email  Diane at [email protected] for an invitation.