Black Kite Cellars and Cartograph Wines share the spotlight, as Alan Baker of Cartograph Wines and Jeff Gaffner from Black Kite Cellars join Steve Jaxon, Dan Berger and Barry Herbst on today’s show (which was recorded in March of 2017). Dan introduces his guests as masters of winemaking skill and balance and in particular, their acid levels are always in the range of food compatibility. This, for Dan, is the key to a good wine. He doesn’t like the “big, fat clumsy” wines that score high but don’t work with food. 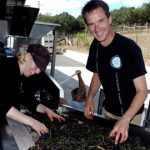 Alan Baker begins by telling that he was a broadcast radio engineer in Minnesota and he tasted a 2009 Alsace Riesling that made such an impression on him that he ended up moving to Healdsburg. Used to be a music nerd producing classical music shows but now he is a winemaker. He moved in 2005 and started knocking on doors. He started producing a podcast and writing a blog and his pitch to wineries in Dry Creek was that if they gave him work, they would also get exposure. Then he moved to San Francisco and made wine in a place called Crush Pad, which made a lot of custom wines. His first vintage at Cartograph was 2006. He moved up in 2009 to launch Cartograph.

Jeff Gaffner then tells he grew up in Sonoma and worked in wineries as a kid. The first grape he harvested was Green Hungarian. His family was not in the business. He went to Chico State where he “studied consumption” and worked once at Chateau St. Jean. He returned there in 1983 and the opportunities to learn were in all parts of the wine production cycle. He learned about wine “backwards” having taken a lot of extension classes at UC Davis. He says, he would go to classes to learn why he was doing the things he was already doing. He then went into consulting and had Black Kite as a client, then they started a relationship developing the wine, with success. There are birds, also called Black Kites or Angel Hawks, that are native to the area. Black Kite is a reference to those birds. On the other hand, the Cartograph logo is based on pins stuck in a globe.

Apart from wines of Black Kite Cellars and Cartograph Wines, Dan brought an older Riesling from Alsace in France, a Cuvée Albert Mann from 2009. It has some nutty flavors, slight oxidation, dried lemon peel, limey, a fascinating wine. The color is deep honey, which comes from the age, and also dried apricot and dried pineapple flavors. Dan mentions aging of white wine as a secret weapon, because people don’t generally do that. Decanting works too, for whites and Dan thinks people don’t do this enough. Jeff used to make a lot of white wines at Chateau St. Jean. Dan says that if a wine is tart when you first taste it, that’s acid, and you can also look for lower pH values, which are sometimes printed on the labels.

They also brought a 2013 Mendocino Ridge Riesling, from Greenwood Ridge vineyard. Dan notices that it is very young. The aromatics are muted. But Dan says its brightness is what carries it. It has aromatically dense fruit and it’s very dry. Barry says it’s a super versatile kind of wine, good for spicy food. Most of these vines are over 40 years old.

Jeff Gaffner produces only Pinot Noir and Chardonnays, for Black Kite, at least. Today he brought all Pinots. Black Kite is a small producer that has vineyard blocks in three places in Anderson Valley and they usually blend from all three. Today he brought wines from all three, Redwoods Edge, Stony Terrace and River Turn. Dan says the 2014s are a fabulous vintage for Anderson Valley. He has tasted several this year and they are all great. The winemaking protocol is identical for all three of these wines, so that the character of each vineyard comes out in the result. This one is very stony, the drainage is good and it has good sun exposure, which makes a difference in the wine. Dan says it’s plump and ripe, richer, voluptuous, maybe not a wine that he would age as long, but he would give it plenty of air.

Steve asks Dan to talk about a recent article he wrote about aging white wine. He says that when white wine is young, it has an attractive fruity quality. Not every wine ages, but the right white wine will reward you with a secondary characteristic that is seductive. Jeff makes a Saxon Brown Semillon, that nobody knows about. The Australians age their Semillons for up to 30 years! Dan suggests putting a Dry Creek Vineyards Sauvignon Blanc in the cellar for a few years and it will surprise you.

The third tasting is the blend of the three blocks of their Pinot Noir vineyards. Dan notices that it has a lot more fruit than the other ones.

Then they taste a wine made from a Mendocino Ridge vineyard, which is between Anderson Valley and the coast, so it is above 1200 feet and above the fog line. https://en.wikipedia.org/wiki/Mendocino_Ridge_AVA

It’s a 2014 and they will taste a 2010 and both are from the same vineyard, so that allows for a good comparison for the effect. Dan says it’s fruit-driven with gorgeous mid-palette and is very well structured. He suggests it might go well with Lamb Breast. The finish on the 2014 has some tight drying tannins. Next they taste the 2010. Dan remembers that 2010 was a great vintage if the winemaker got his pH low enough. Alan says that this vineyard always gets an earthy flavor in its aromatics. Dan wouldn’t cellar this for more than 7 or 8 years. He says the pH gets risky if you go beyond 8 years. Dan teaches at the Junior College, about pH, just last night. The students asked, why don’t we know this stuff? Dan said it’s because the wineries don’t want you to know that information, althought Cartograph puts that info on their back label. Dan says that what he likes about these wines is that they are authentic.

Next they taste a Dolcetto d’Alba, which is quite a different wine than what they have been tasting today. Dolcetto is very popular grape, and wine, in Italy, coming from the north-western region of Piemonte, or Piedmont, in English. This wine has the acid level that you need for red pasta sauces. When they are young, these wines are a little risky. Barry mentions that this is a popular wine in Piemonte and it’s the house wine in a lot of restaurants in the region. Dan tastes it and says, “this is really wonderful.” It’s juicy, lively and goes with the entire spectrum of food from Piemonte. Dan says it has good flavors and would go with salame or cheeses of Piedmont.