The featured guest on California Wine Country today is David Ramey, who is the winemaker for Ramey Wine Cellars and Sidebar Cellars.

Steve Jaxon begins by citing the timeline on the Ramey Wine Cellars website and David tells about how he started making wine in 1996. He and some friends who all had liberal arts degrees went back to UC Davis to study wine, then he worked abroad, in France and Australia, then at different wineries in California, such as Simi, Matanzas Creek and Chalk Hill. Then he worked at Dominus Winery with Christian Mouelx.

His first Ramey Wine Cellars was 200 cases of Chardonnay, in 1996. Dan tells how Dave has been a consulting winemaker for a long time, helping a lot of small brands become outstanding. His wines have California fruit with European sensibility. He gets flavor profiles that nobody else gets here.

David Ramey has brought some Ramey Chardonnays, including two old ones. There are 2 Russian River Valley Chardonnays, one is 2005 and the other is 2007. The fruit came from certain specific vineyards including Dutton, Martinelli and Rochioli. Dan says these wines show what red wine style the white wines can move into, when they get appropriate aging. He calls these ‘red wine with no color’ and says it has a lot of substance and richness to it. Dan describes the flavors as lemon curd and crème brulée. Barry Herbst points out that there are few wineries that can claim three of the most iconic growers in their area in their lineup of entry-level Chardonnay. 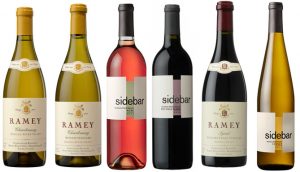 They taste the 2015 Rochioli vineyard Chardonnay, their first vineyard designated Chardonnay, just released. Dave says that he refers to Chardonnay as the red wine of whites.

Next they taste the 2007 Chardonnay and compare it to the others. Dan says he finds it slightly richer than the 2005 that they tasted earlier. Dave points out that 2005 was a cooler vintage, so the 2007 is plusher than its 2005 counterpart. Dave explains that he makes wine with native yeast and native bacteria, the old fashioned way. These Russian River Chardonnays spend about 12 months on the lees in barrels, whereas the single vineyard ones spend about 19-20 months on the lees in the barrel, which gives complexity and texture. He makes the analogy of making a thick red sauce, one made over several hours will have more complex flavors than one made in 30 minutes.

David Ramey talks about the new winery they are building. They bought Westside Farms, about a mile south of Rochioli, a 75-acre parcel. They will build some tasting rooms there and some cut-and-fill caves. Eventually they will move entirely into that location. Currently they have an industrial building in Healdsburg where they host tastings by appointment.

Next they discuss Ramey’s line of Sidebar Cellars wines. First, Dave points out that there is a varietal firewall between Sidebar and their other bottlings. Each varietal is bottled under one or the other label, never both. First they taste the Rosé and Dan says a Rosé of this character is rare. He says you could serve this one at room temperature and it has the quality that does not require it to be chilled. Dave describes the process as pure; it was picked at about 21 Brix, whole cluster pressed and then fermented in stainless steel drums with native yeast and left on its lees for about 4 months. Then it was bottled unfiltered, which is rare for a non-malolactic wine. Dan says it’s a risky process but that Dave knows what he is doing.

Steve asks David Ramey to explain “lees” which is the yeast cells that carried out the fermentation of grape juice to wine, then when they eat all the sugar they fall to the bottom of the barrel. They are yeast cells that are spent but still alive, and as Dan says, they develop character that you can’t get without them. It keeps the wine dry by keeping the sugar down.

Next they taste the 2015 Sidebar Red Field Blend. Half of the vineyard was planted in 1865 and the other half was planted in 1950. No new oak, dry, about 80% Zin, 10% Alicante Bouchet and 10% Petit Syrah but there are other varieties planted throughout the vineyard. Dan says it has raspberry and blackberry flavors, like a Zin. David points out that it too is dry, with no sugar, and no new oak. They think it would go well with hamburgers with grilled onions or blue cheese.

Steve asks David what’s coming up in 2018 and he says they are still working on their permits to build their new winery, which is on ongoing process.

Finally they taste a Syrah, which Dan calls one of the best in the world with its rich flavors. Dan says it’s surprising that people have not recognized cool climate Syrah as a go-to kind of wine.

Dan tells that David is making a Kerner, which is an aromatic white wine grape normally grown in the Alto Adige (“AL-to A-di-ge”) region in northeastern Italy.