Stu Smith, co-founder of Smith-Madrone Winery, joins Steve Jaxon and Dan Berger today. He will be on Zoom from his home on the vineyard in upper Napa Valley. The last time he was on California Wine Country was May 3, 2017, here is a link to that podcast episode.

Before they begin talking to Stu Smith, Dan Berger has brought another “cellar dweller” to the show, an old bottle from Dan Berger’s massive personal wine cellar, to open and taste. It’s always a mystery when these bottles are opened. This cellar dweller is a 2009 Semillon, which Dan calls an unusual grape variety. It’s usually picked very early. It would be good with seafood as long as it’s not with a cream sauce. It has flavor that you won’t get in any other grape variety. “I love this, it’s fascinating and unique,” says Steve. 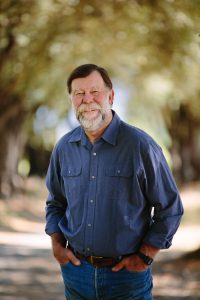 Stu Smith joins Steve and Dan on Zoom. He founded his winery with his brother at the age 22 in 1971. He first walked the property in the Fall of 1970. It was a different world. Wine had not yet become a “major issue” for Napa and Sonoma Counties. It was provincial and he was in the backroads. Dan mentions that it was only 5 years after Robert Mondavi first planted. They are located in St. Helena, at the junction of the road that leads over the ridge between Napa and Sonoma counties, at between 1300-2000 feet elevation.

They suffered moderate damage in the Glass fire, and had to replace some equipment. Several trees have to be removed and it’s a lot of work, but “we are fortunate that we didn’t lose anything substantial.” There is ample documentation of their fire damage at the Smith-Madrone website.

They do very little irrigation and they harvest their Chardonnay a little earlier than others, so its acidity is strong.

“We’re a little bit more European in style than Californian. We praise the concept of balance complexity elegance restraint finesse. We tend to think that wines should give pleasure, they should be hedonistic. (…) (We) believe that getting the vintage into the glass of wine is our job. We vintage date to celebrate the diversity of the vintage dates…”

The high elevation, after hundreds of years of erosion, the soil is very lean, and the soil profile is completely different than the valley. There is very little water. Dan explains that it’s tricky to grow grapes at this altitude. The soil is not particularly fertile so the yields are held down naturally. They rarely go over three tons to the acre. Some friends of Stu with Zinfandel acres in the central valley go 24 tons to the acre. Dan Berger points out that this is very reliant on how the wine reacts to its soil conditions.

Stu mentions Virgil’s treatise on farming and quotes the Latin, Bacchus amat colles, which means Bacchus loves the hills. He explains, the wines that come from hillside vineyards are more distinctive because the vines have to struggle and the berries are smaller, making a higher skin-to-juice ratio. Irrigation was not practiced until the mid-60s in California, when they irrigated to prevent frost. So farmers had water in the summer too, and irrigated. It made more production, but of common quality. They have held back their 2017 until now, compared to many 2019s that are in stores already.

Stu tells his story of growing up in Southern California and attending Berkeley in the mid-60s. He liked wine already then and took an introductory wine class at UC Davis and he did not want to go back to LA after college. His second attempt to put a syndicated partnership together worked and the rest is history. (The Smith-Madrone website has a lot on this subject as well.)

They also taste the Smith-Madrone Riesling, which Dan Berger says comes from “a very blessed piece of property.” It is an astounding wine, Dan tastes slate, jasmine, and wild juniper. It carries the flavor of the soil because the acid is so good. Stu says there is .65% residual sugar, just a hint of champagne flavor. It was the first wine they made and it won the 1979 wine olympics in Paris, they won the German wine division. His brother Charlie, his brother Sam and he all just love Riesling.

Dan Berger describes it, “…this wine is dry, but it’s not.” You taste the sugar at first then it goes away. “It’s like the perfect wine.” Dan Berger really digs Riesling like Dan Berger. “If you need a glass of wine in the morning, there is nothing better than a little Riesling,” says Stu. “And an egg,” adds Steve. Look for “Riesling and an egg” to appear on Ricardo’s breakfast menu for the remainder of the season!

Stu says that 25-30 year-old Rieslings are as strong as any wines in the world.  Dan tells that in 1900, the highest wine prices at auction were for dry rieslings.

Dan Berger says, if a producer is making Chardonnay and Cabernet but also Riesling, that means that they are serious about wine. Dan says that in Nielsen ratings, sales of Rieslings are steady and strong. Stu says that Riesling in Napa county sells for more than Chardonnay. The numbers are small, but the price per ton of Riesling is higher than for Chard.

Dan asks Stu what Napa Valley was like in 1971. It was totally undeveloped yet and there was not even a good restaurant in town yet. Stu also tells about working with André Tchelistcheff. They hired Stu to map some vineyard land that had just been acquired from Beaulieu, for a syndicate of investors.

Finally they taste the Cabernet and Dan says any of Stu’s Cabs will simply be better in 20 years.