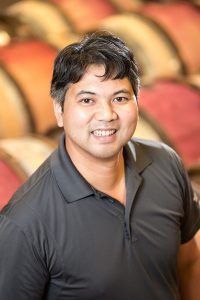 Jeff Mangahas, winemaker at Williams Selyem Wines, is our guest on California Wine Country with Steve Jaxon and Dan Berger. Harry Duke is sitting in or Steve Jaxon today.

We begin with a wine that Dan Berger has brought from his extensive personal cellar. He calls it “a baby,” it is a 2010 Riesling from Robert Weil from the Rheingau. As they taste the 2010 Riesling from Robert Weil in the Rheingau, region in Germany (located east of Frankfurt). It is 11 or 12 years old now, yet it is still in transition. It will be even better in six or seven years. The Rheingau is a little warmer than the rest of the country. The hills are steep, the bedrock is slate and there isn’t much topsoil. Dan Berger suggests putting it in a black glass, which changes your perception of it. A good Riesling can be considered a red wine without color.

Jeff Mangahas summarized the story of Burt Williams and Ed Selyem who were making garage wine in the ‘70s and ‘81 was their first commercial release. Pinot Noir mostly, a little Chardonnay and a little Zinfandel, mostly from unique sites with terroir personality. They focus on small vineyards, unique sites, wines with personality. They suddenly won an award for the #1 Pinot Noir in the nation and they were off to the races, with great success. John Dyson bought the property from Bert and Ed in 1989. The story is on their website. https://www.williamsselyem.com/our-history/

They have a small production that is sold direct to consumer. You have to be on their mailing list to get their wines. There are only 500-600 cases of this Rochioli vineyard Pinot Noir made every year.

They just finished harvest of Zinfandel this year. The weather was perfect this year and they could pick under ideal conditions. They starated around Aug. 12. Usually they are one of the first in Russian River Valley to pick. They have such diversity in their vineyard sites, and Jeff describes monitoring the sugars and ripeness and phenolic levels for each vineyard.

This year’s quality is very good although the crop is a bit smaller than usual.

Jeff has brought a 2021 to compare to the 2019 Rochioli Pinot Noir that he brought. It is also a raw, young wine, but showcases the intensity of the year.

Williams Selyem was once called Hacienda del Rio, which Dan Berger says is a pretty fancy name for it considering that it was a garage. Bert and Ed were working at the SF Chronicle when they came to start making wine. They had an innovative way of making Pinot Noir. These wines were lighter in weight and lighter in style but the flavors were “outrageously interesting.” They managed to capture the personality of the different vineyards. Ed Selyem was the wine buyer at the store where Dan Berger would buy their wine.

Ed Selyem was the wine buyer at Speer’s Market in Forestville, so that was the only place to find it, so Dan used to get it there.

Dan Berger tells how Williams Selyem revolutionlzed Russian River Valley as a Pinot Noir region. They did it withoug adding weight or depth to the wines. That is what set Burgundy wines apart, what gave them personality, and these wines are made that way.

Jeff Mangahas tells how winemaking is a second career. He had an established career as a biomedical research scientist, with a Biology degree from University of Washington. He even worked at Princeton University as a reasarch scientist for two years. But he liked wine and knew about Washington wines, even back then. He and his wife took wine tours in Europe and loved it. He went for an MS in Enology at UC Davis. His first wine making job was at Dutton-Goldfield, which was a great education. He is still friends with Dan Goldfield. At Hartford Court in Forestville in 2006 he got his first winemaking job. In 2011 he started at Williams Selyem. He worked for winemaker Bob Cabral there. “It is a dream job.” Dan Berger says that Jeff “has checked all the boxes,” because he has worked with such great expert winemakers early in his career. One is Dan Goldfield, who founded his winery with fruit from the Dutton family. Also John Dyson brings knowledge of wine in New York state and Italy. Jeff says that John Dyson is unique in his expertise in the business side, as much as viticulture and winemaking.

John and Kathe Dyson also own a villa in Italy and they were two of the major donors on the restoration of Michelangelo’s David.

Michael Haney, from the Sonoma County Vintners Association, wanted to call in to testify to his friend Jeff’s ability. Jeff is a world class ambassador for Sonoma County as well, says Michael.

They have been sampling some wines, starting with a 2019 Williams Selyem Chardonnay from the Louis MacGregor estate vineyard, which they bought in 2014, in the heart of the “middle reach” of the Russian River Valley. It also has Wente Clone Chardonnay, with tiny berries and looser bunches. Jeff describes the wine in detail.

Dan says it splits the difference between rich and tart. Its refreshing, but has richness and crispness, intensity and delicacy in the aftertaste. These are compact and provide varietal characteristics at $85 a bottle that other more expensive wines do not have.

Dan Berger has not bought French Burgundy wine for years because theirs is overpriced, compared to the highest quality California Pinot Noir, such as these Williams Selyem wines.