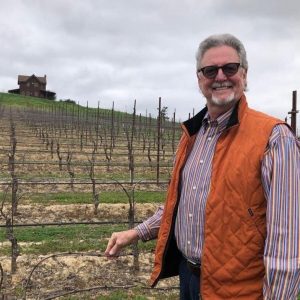 Darryl Miller from Dehlinger Winery is the guest today on California Wine Country with Steve Jaxon and Dan Berger. He has a background in the wine business, first in Seattle then in California since 1975. He moved to Sonoma County and started his own wine brokerage. There were only 2 or 3 distributors in California at the time. He got some really good wineries together and he could represent them.

In 1982 he met Tom Dehlinger at a tasting with many other winemakers. He was the only non-winemaker there. He kept asking to sell his brand, but the job was always taken. Then in 1985 they bought the property next door and left a building called the Octagon, on the property, where Darryl lived for five years. Now 35 years later he is back to help the family sell their wines. The Dehlinger family has run the winery for four decades. Today two Dehlinger sisters are running the operation, Eva Dehlinger is General Manager and Carmen Dehlinger is in charge of Sales & Marketing. Eva Dehlinger was on California Wine Country in October of 2018.

Darryl likes to pour the red wine first, which is the Burgundy tradition. Dan explains that the Chardonnay is considered the heavier more important wine, and the reds are rather light.

They are tasting the 2017 Goldridge Pinot Noir wine. The wines are named for the soils in the different parts of the property. The soils are different and their effect on the wine is remarkable. The Goldridge soil is a fine grey-ish colored soil in that area near Sebastopol, California. Next they taste the same wine in the 2016 vintage. This one has more body to it. Dan Berger says it’s a great example of how vintages do play a role. They really are different from year to year. This one is more intense, the other is lighter and more fruity.

Now they taste the 2018 Chardonnay. Dan says it displays its region very well, which is above the fog.

Dehlinger wines are available through the website. They only make 7000-8000 cases per year. Most of their varietals have only 1000 to 1500 cases made. They have direct consumers and some restaurants and retail around in California and a few other states. They have opened Colorado and New York, but with small amounts. The appellation is Russian River. Green Valley is within Russian River, but they use Russian River appellation.

Dan Berger says their wines have good balance and structure. Dan has some of their wines from the ’80s and they are holding up well. If this Cabernet had been made in Napa Valley, Dan says it could sell for $200. This sells for $60. They have some of the greatest clones that are used in California, says Darryl. Dan Berger says they are also careful to maintain the house style. The flavors are consistent from year to year. They are stable and “live forever” in the cellar.

Since they have such little production, they have to distribute their wine carefully. The family does want it to be available in different places, but they do have to manage where they sell it. Dan Berger remembers in the ’80s it was very hard to get. That was the image that they winery developed. The demand was greater than the amount of wine produced, yet they are reasonably priced. Darryl says it’s still like that.