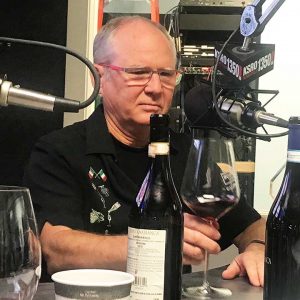 Don Chigazola is back on California Wine Country with Steve Jaxon and Dan Berger. He is an Italian wine merchant. His company, Chigazola Merchants, imports small lots of fine Italian wine from small family producers located all over Italy, which he sells mainly through the Chigazola Merchants website, to his subscribers. Some wines are also in a few top local restaurants, by the glass.

Don describes how he made the transition from a career in the tech industry to setting up his company. He would go on vacation to italy and sample their great wines, most of which are never imported to America. He would come home and look for them, but he could not find the selection and quality he knew from Italy. So, he set up the company to look for good deals on the best wine. He finds small family producers in the country’s many wine producing regions, and he selects his favorites among them to establish a business relationship.

Dan Berger agrees that there are many great Italian varietals that deserve our attention, that simply do not arrive upon our shores. That’s why Chigazola Merchants has such an important role in the market here. There are great varieties that people here have never heard of, and will never find away from Italy.

Here is the recording that shows the pronunciation of these Italian wine and geographical names, from Sonia Maspero, an Italian broadcaster expert in languages, food and beverages. Grazie Sonia!

Dan says that the key to their success is to monitor the quality all the way from bottling to shipping, in cold containers. It’s a complicated process. 200 years ago Don’s ancestors immigrated to America from Genoa, Italy, arriving in to New Orleans, which was the other early center of Italian immigration apart from the northeast.

The first wine they taste is Passerina, it’s bright, fresh, young, elegant with aromatics and a very delicate fresh fennel element with a bit of celery on top. Very bright with no oak, balanced, beautiful acidity to go with just enough alcohol. It’s labeled as 13.5 but feels like less.

The winery is about two kilometers from the beach. Passerina is grown strictly in the Marche, which is the region on the Adriatic coast, along the middle of the peninsula.

Every region has its famous wines. Piedmont is known for Barbera and Barolo, Tuscany is known for Chianti, and central Italy is known for whites. Don’s wine club members have been asking for more and more white wines lately. Dan Berger thinks it’s because there is too much sameness in Chardonnay and Sauvignon Blanc in the US. There is some Pinot Grigio which usually isn’t very interesting. The Italian whites grow on you, they all have character of their own.

Don Chigazola has many great stories about friendships made among the families and winemakers. One story of a family in Montemiletto, in the province of Avellino, in the inland hills. There is an old Norman castle there. Don found the piazza in town, in the afternoon, where the local men were congregating. He asked them who made the best local wine and immediately he got a flood of suggestions. He asked them about the De Santis family, whom he was going to visit, and they all said their wine was first rate. So before he even went to the winery, “we had the endorsement of the park bench.” Later, they family got him a private tour of the castle.They also taste the Pecorino, also from Paolo and Carlo Petracci at Cantina Madonnabruna. Dan says it has a very faint hint of dried pineapple. It is great now and could get richer after a year.

They also taste the Verdicchio which would go very well with clams. This variety is emerging as one if Italy’s most significant white wines. Don says that the Italians are beginning to realize that Verdicchio is the star of Italian white wines. There is still not very much of it on the west coast. Andrea Petrini, the producer, lives and breathes Verdicchio. His wine has become very popular. He only has about 20 acres but he is selling out all of his wines. Tenuta dell’Ugolino is the winery, named after his grandfather. The Vignetto del Belluccio is the name of the vineyard.

Don says that more often than not he has to say No to a winery, and after getting to know them, sometimes that’s not easy because they are so friendly.

The Falanghina and Greco di Tufo wines are the last two opened and tasted. Both come from the Avellino province in the Campania region, inland from Naples. The Greco di Tufo comes last, and among today’s bottles, it is the only DOCG wine, the highest certified designation, meaning Denominazione di Origine Controllata e Garantita. Greco is a kind of grape that originated in Greece.