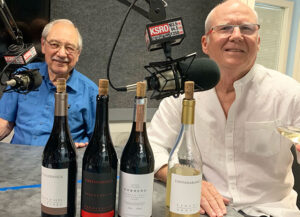 Piemonte wines are on the table today as Don Chigazola is back on California Wine Country with Steve Jaxon and Dan Berger. He has brought some wines from Piemonte (the region in northwest Italy located south of Switzerland and east of France). His company Chigazola Merchants imports unique wines produced in the various regions of Italy. They travel back roads in Italy and meet the local people in order to find the best long-established producers. They are mostly small family operations making the wines that are traditional in that region. They taste a lot of wine and meet a lot of people. They build relationships with the ones that make the best wines, which they will import. They work with 12 different families, soon to be 13, in 10 different regions. On these previous editions of California Wine Country, Don Chigazola showed white wines from various regions of central Italy, and once specifically from Umbria. Today he has brought wines from Piemonte (which is also known for truffles).

Traveling the Back Roads of Italy

They just got back from almost a month in Italy, hunting for Riesling in the northeastern province of Alto-Adige. There he found a new producer and he hopes to have their wines in California by the end of the year. They make Riesling, Silvaner and Kerner. The last of those two are not well known over here at all.

Their travel patterns to Italy were somewhat interrupted during the pandemic. Vinitaly is a Verona-based international wine show, which takes place annually in April. There are more than 6,000 Italiain producers showing their wines there. Don also attends this show to find leads.

Chigazola Merchants is a small operation. They typically import 300-500 cases per year, into Sonoma County. That qualifies them as a micro-importer. They are going back to Sardinia in September. Cannonau is a big red from Sardinia, and Vermentino is a tasty white wine produced there (and also in Tuscany and Liguria).

Dan Berger points out that these wines are not going to be known or reviewed by the mainstream press and commercial outlets. He is a direct importer, so his prices will not be marked up as much as the national distributors do.

A varietal called Langhe Arneis is the first tasting. This comes from the Pola family in the village of Neve, in the Barbaresco district. It is called Fontanabianca, which means white fountain. There is a fountain on their property whose water is white due to the minerality.

This wine is “poco mosso” which means it has light natural bubbles. It ls light and easy drinking but also has good acidity so it pairs with food. Don likes it alone or with salads and soups, or light meats or spaghetti alle vongole. Dan Berger explains that they figured out how to make good wine from Arneis after stainless steel tanks came on, which lets you keep it cool.

The two titans, Barbaresco and Barolo, are both based on Nebbiolo grapes but the two areas have very different terroir. First they taste a Barbaresco, which must be held for a full two years. It is supposed to be a light color. It is like a daily drinking wine but it will also stand 6-8 years in the cellar. Michele Pola, the winemaker, recently took over from his father.

The other big red is a 2017 Sobrero Barolo, “the wine of kings and the king of wines.” Barolo has more of a “leather belt” character. It is big, dark and lush. Barolo’s weather and soil are completely different so the Nebbilo grape expresses very differently than Barbaresco. (Nebbiolo the name comes from the Italian word nebbia, meaning fog.) Don explains that these wines have great residual acid so they will age a long time. Don Berger warns to open it six to eight hours before drinking and to decant it.

Don explains that he always holds his red wines for a while in order for them to settle down.