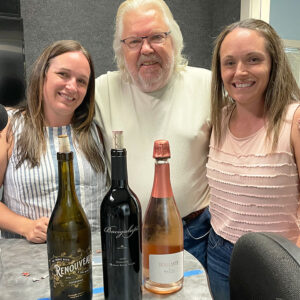 Katey Bacigalupi Row and Nicole Bacigalupi Dericco join Tom Simoneau today on California Wine Country with Steve Jaxon and Dan Berger. The Bacigalupi family owns and operates Bacigalupi Vineyards. Their parents Helen and Charles Bacigalupi, purchased 125 acres on Westside Road in 1956. 2021 was their 65th harvest. Tom Simoneau met them when he and his wife were new to the area in 1988. He mentions that the Bacigalupi reputation is second to none in the Russian River Valley.

We will start by tasting the Bacigalupi sparkling Blanc de Noirs, a 2017 vintage. They make bubbles every four years and they use raw local honey instead of cane sugar for the dosage. After their first sparkling vintage in 2014 they were satisfied but they still wanted to look for a way to improve it.

The team did some tastings and found a favorite that was done with honey so they found a local beekeeper to meet their supply requirements. It is 50% Chardonnay and 50% Pinot Noir and the honey brings a unique flavor. It is available online and at the tasting room, which is located at 4353 Westside Road and open by reservation every day except Tuesday.

Here, Tom Simoneau tells about how the Grgich wine that won the famous Judgement of Paris tasting in 1976 contained 40% fruit from Bacigalupi Vineyards.  Dan Berger says that their older vines produce great fruit. Older vines produce more intense flavors and the winemaker can get great acidity and balance out of older vines. Growers like younger vines for their higher yields but older vines produce lower yields per acre but more interesting flavors.

Next is the 2019 Bacigalupi Chardonnay, which they have dedicated to Helen. It is named Renouveau, which means Renewal. The 2.5 acre bloc produces only about 100 cases per year. It was under contract to a Napa producer for 20 years; only recently they were able to use the fruit themselves. 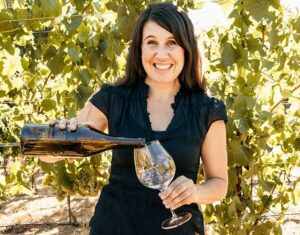 They have been working with Ashley Hertzberg, consulting winemaker. This is their 12th vintage together. “She is really good at coaxing out the natural quality of the vineyard with really minimal manipulation.” Tom Simoneau knows her as a “really tremendous winemaker.”

Bacigalupi Vineyards is about to hold their next Vineyard Designate Tasting fund raising event. The tasting includes several wines that are made all over wine country using fruit from their vineyards. It all happens on Saturday July 16, 1-4 PM.

The Bacigalupi Chardonnay has it all, a lot of oak, a lot of fruit and a lot of complexity. Dan would put it away for three years but not more, since “…they’ve already given you what you want, in this wine. This wine has already got way more complexity than most Chardonnays will ever have.”

Next they taste the Zinfandel, which they consider the crown jewel. They have about 60 acres of Zinfandel on relatively cooler-climate land that gets some fog. Vineyard conditions call for a lot of thinning on their Zin, first while the fruit is green and then again if they see it is too heavy. If the vines are too loaded the fruit will not ripen. Their yields are about four or five tons per acre.