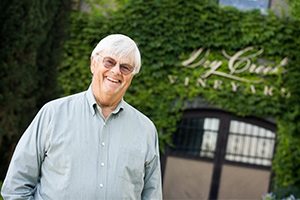 Dry Creek Vineyard founder David Stare and daughter Kim Stare Wallace join Steve Jaxon and Dan Berger on California Wine Country. Tom Simoneau is in the studio today. Dry Creek Vineyard was Tom’s Winery of the Year for 2021. This year they celebrate their fiftieth anniversary. They got the front cover of Wine Spectator magazine too.

They are one of the last truly private, family owned wineries in Sonoma County. David Stare grew up in Boston, MA. After graduating college and getting an MBA, he got a job in Germany for a steel company. On weekends, he visited wineries. Then in June 1970 he spent two months in France and decided he wanted to get into the wine business. When he saw an article in the Wall Street Journal about the potential for the wine business in California, it was a sign. In the summer of 1971 he and his family moved to California and he enrolled in courses at UC Davis. He realized that northern Sonoma County had a tradition of grape growing and so he bought a run down prune orchard in 1972 and the rest is history.

In summer 1972 he tried to get a use permit for a winery at his house, which the neighbors objected to. So he was forced to build his winery down the hill. Today, he is glad they are located where they are, because he considers it to be the prime spot in the valley. Tom Simoneau even bottled his first wine at Dry Creek.

They taste the 2021 Fumé Blanc, their fiftieth vintage. He always liked Fumé Blanc and he planted Sauvignon Blanc even if people told him it was not a good area for it But David turned out to be right. This is their flagship wine and they were the first Sonoma County winery to sell it. Robert Mondavi used the term, and they found that Fumé Blanc sold better than Sauvignon Blanc by 3-1, even if it is just an old-fashioned term for the wine. This sells for $11.99 at Bottle Barn. It was just listed as Wine Spectator’s number seven of best values on the market.

Click the logo to visit our sponsor Bottle Barn online for the best deals on wine, beer and spirits, including many Dry Creek Vineyard wines.

Then they taste the 2019 Heritage Vines Zinfandel, which was Tom Simoneau’s Zinfandel of the Year last year. Chenin Blanc still sells well, which used to be the most popular white varietal. Dry Creek Vineyard wines have moderate alcohol and good acidity, so they age well. Steve Jaxon mentions Tim Bell, Dry Creek Vineyards’ winemaker, who has been on this show before. Tim Bell joined the staff of Dry Creek Vineyard in 2011, which was a difficult harvest. He used to work at Freemark Abbey and before that, worked in retail. He also worked for Kunde when that family owned the winery.

The Dry Creek Vineyards 2018 Meritage is “a killer” says Tom Simoneau. David Stare was around when the term Meritage was created, a portmanteau between Merit and Heritage. Dan Berger organized a contest in 1988 to find this name and one guy from the East Bay came up with it.

They make two blends, this one called Mariner, is predominately Cabernet Sauvignon. Both of them celebrate the Bordeaux varietals in Dry Creek Valley. This wine has an “under the radar tannic structure” says Barry Herbst.

They have time for one more red, a 2018 Cabernet Sauvignon, blended with a little bit of other Bordeaux varieties. David Stare was making Bordeaux blends here in Dry Creek Valley before they became fashionable. All the blends in Bordeaux are blended to some extent.

They are located in the heart of Dry Creek Valley, off the 101 at Dry Creek Road. The place is wide open and beautiful. Most of their tastings are outside right now and they have beautiful gardens and are open 10:30 to 4:30, open every day. Reservations are encouraged. There is a very active wine club, with many single vineyard wines in small amounts.