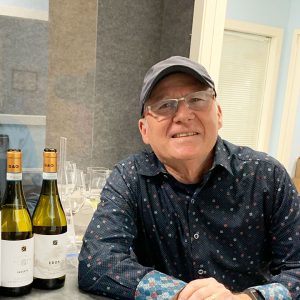 Don Chigazola is back on California Wine Country with Steve Jaxon and Dan Berger. Don Chigazola runs Chigazola Merchants, which imports specially selected wines from Italy direct to consumers here in California. He and his son spent the month of September in Italy, meeting current producers and looking for new ones.

The first wines come from Benedetti & Grigi, one of his suppliers. First, they taste a Grechetto, named Eros, to honor the grape’s Greek origins. It’s not like a Chard at all, not rich, but rather green and lemony. It’s light on the palette and easy to drink. It is popular in Umbria with first courses, soups, salads and seafood.

Next they taste a Trebbiano Spoletino. It comes from the Spoleto Valley, where the town of the same name with the famous music festival is located. Trebbiano is a common white wine grape, and the Trebbiano from around there is called Spoletino.

This is an autoctonous variety, meaning that it is indigenous and originates from that area. There are two autoctonous varietals from Umbria, Trebbiano and Sagrantino, the red that we will taste later. Dan Berger notices that this wine has aromatics that suggest a bit of both Pinot Grigio and Gewurtztraminer. The spice is subtle and it would go well with fish cooked with fruit. One example is Sole Veronique, which is poached in white grape juice. This wine is very dry, as are all these wines.

The Grechetto retails for $30 and the Spoleto for $34. The Spoleto is a 2019 and the Grechetto is a 2020. They put the Spoleto down for a year, which Dan says gives it a softness on the palette and balances it. The vineyards are at about 400 meters elevation, about 1300 feet.

These local produers that work with Chigazola Merchants do not make enough wine to even get distribution in large retail chains. These families have been in local agriculture for generations and recently began making wine. The winemaker, Matteo Bassili is doing great work.

Sonia Maspero in Milan, Italy, has reorded this pronunciation guide for the wines that Don Chigazola has brought in today.

Don describes his favorite way to find the best local wine. There are always public spaces in Italian towns where you can ask the locals for advice. Don introduces himself and looks for the consensus local favorite, then he meets the producers and looks for the best ones to import through Chigazola Merchants.

Next they have a 2017 blend, a DOC red wine called Montefalco Rosso, 70% Sangiovese, 20% Sagrantino and 10% Merlot. Dan Berger likes it now and says it will be so much more in two or three years. A bottle like this can taste even better the next day. Dan also likes that the alcohol is not so high as to be overpowering.

Next they taste a DOCG Sagrantino. The Sagrantino grape is very tannic and requires years of age before it is approachable. The current release is the 2015. It is a really heavyweight wine, but if done well, will be smooth and age for 25 years or more. Dan suggests decanting it for 24 hours before drinking, because the aereation helps a lot. Dan does have some 25 year old Chianti but which has not held up, that is too long for Chianti.

Don notes that these vines, growing at about 1300 feet elevation, are pruned to yield only about 2 tons per acre. They will drop a lot of fruit to maintain the character and intensity of the remaining fruit. Dan Berger says that gives it intensity and power without any raisiny or oily richness. Montefalco Sagrantino first came out in the ‘70s as a desert wine, as a passito, made with dried grapes. It wasn’t until the ‘90s that the dry Sagrantino became popular. So there aren’t a lot of 25 year old Sagrantinos around.

Don Chigazola says that Montefalco is beautiful a hilltop town surrounded by vineyards. Umbria is worth a visit. The largest city that it’s near is Perugia, which is not large, compared to say, Rome or Florence. It’s about a 2 and a half hour drive north of Rome.