Rick has been at Rodney Strong Vineyards 38 years ago, which is when Dan Berger started writing his wine column. Steve asks Dan to tell about Rodney Strong Vineyards and he tells how the Klein family owns the property now and that Rick has been making high quality wine there for a long time. Rick has great relationships with growers, and it helps for a winemaker to be there for so long, for consistency and continuity. Rick worked at Simi Winery for 10 years before coming to Rodney Strong. He started there at age 19. His son was born a year after he started at Simi. 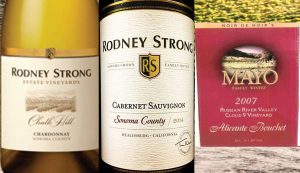 He was mentored by André Tchelistcheff, working for him for 7 years. Dan says that he saw the documentary that they talked about a few weeks ago and that it was extraordinary. It might be available for purchase of for streaming, only after their current distribution contracts are fulfilled. Unfortunately the film debuted on the Monday after the fires started and a lot of people couldn’t get to the film. Rick had to stay at the property.

They are drinking a 2015 Rodney Strong Chardonnay. Dan says this wine exceeds what the vintage offered. Rick says it’s the Chalk Hill Chardonnay. His first one from there was 1980. It was 6 years before the appellation was on the map. It has always been barrell fermented. A few trips to Burgundy taught him how to do it with the complexity of a French Burgundy and the fruitiness of California. It won double gold at Harvest Fair this year. Rick brought all of his press clippings. This is the winningest Chardonnay in the nation. He also has the Rodney Strong Sonoma Coast Chardonnay, and they both scored

After an on-air plug for the podcast, Steve remarks that Rick has been at the same winery for so long. Rick says that the Klein family has owned Rodney Strong since 1989 and they are dedicated to producing the best wines possible. They have the ability to isolate their best grapes. Usually, in a 50-ton block, the grapes are all mixed on the trucks and there was no way to identify special areas. Now they have been doing this since 1985. Dan says that logistics of winemaking are crucial.

Dan says this year we will lose only about 10% of the vintage due to the fires. All the whites and rosés are already picked, 80% of the reds are picked. Only the Cab Sauvignon and Zins are not picked yet. A lot of people acted quickly and avoided trouble. Rick says you have to ferment it first before you can send it for analysis. 80-90 percent of his wine is fine. Dan wrote an article last week about smoke taint and said it won’t be a problem.

Rodney Strong makes Sauvignon Blanc and Chardonnay for whites, Cabernet Sauvignon, Merlot and Pinot Noir for the reds, a little bit of Zinfandel. They are sticking to the “classic” wines (for California).

Next, after the break, they taste the 2014 Rodney Strong Cabernet Sauvignon. It’s all aged in French oak so it has the pecan nut aroma from the wood, but it has a strong varietal character. Dan says it needs about 10 years in the cellar but that most people won’t age wine like they used to. So if you drink it now, decant it and let it take on the air for about two hours. It sells for between $26-$35 per bottle at retail and compared to other bottles at $80, it is a steal. Dan says he has tasted the 2014s now for a year and this one is very good. Rick says he prefers the ‘14s now to the ‘13s. Dan says 2011 was a cool year and he likes them a lot.

Steve asks Dan that this will be a good vintage and there wasn’t that much lost. Dan says that the 2008 fires came in August and that did a lot more damage than this year, to the fruit and the wine. Dan says that producers this year won’t be raising prices because, as Dan explains, they can’t afford to. There is too much good wine already on the market and they don’t want to price themselves out of the market. Most producers will not be making less wine this year. 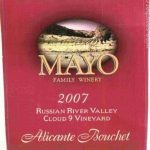 Barry has brought a wine too, today, one that he remembers from the Harvest Fair. A judge can invoke a “silver bullet” if he likes a wine enough, to veto the other judges and elevate a wine to Gold Medal status. Barry did that for this wine at the Harvest Festival recently. The grape variety is Alicante Bouschet, this one is from Mayo Family Winery. Most red grapes make clear juice, but this grape actually makes red juice, so it is often used for its color, in blends. On its own, it’s remarkable distinctive flavors. Very few people make wine with this grape. Dan says it’s fascinating but not mainstream by any means.

Dan asks Rick to talk about the Alexander’s Crown wine, which he has been making for a long time. In 1974 when it first came out, it got rave reviews. Partially because it’s from Sonoma County, it doesn’t get the accolades it deserves. Rick explains that it’s a big story about the evolution of the vineyards. When Rod Strong planted the vineyard, he did not know that the vines had leaf roll virus. It went into decline. When the Klein family bought the vineyard, they replanted everything a couple of times. Rick says now the Crown wine is back. It’s called “Crown” because of its location at the top of a hill that rises in Alexander Valley. It has exposure in all four directions, north, south, east and west. The different exposures all have different characteristics.

Rick brought Dan a little token. Dan asked Rick to be a judge in 1988 when he was young and the judges awarded a Cabernet a Gold Medal and he had awarded it a Silver. Randall Graham asked him to change to Gold, so it would be a 4-star Gold Medal. He didn’t want to change his rating. Later they told him that the wine in question was his own!