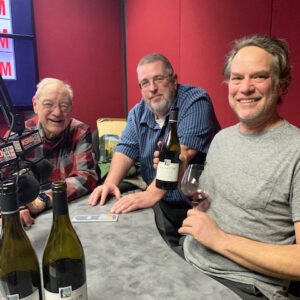 Balletto Vineyards winemaker Anthony Beckman is our guest on California Wine Country today, with Dan Berger and Harry Duke. Steve Jaxon is away today. Anthony has been on the show before, the last time was this show in August of 2019.

Balletto Vineyards today has more than 800 acres of vines and produces all of its own wine from its own grapes. They were a very successful vegetable farm before deciding to convert to growing grapes. Dan Berger describes his favorite photograph of himself, in which he is holding two wine glasses, taken in one of the Balletto vineyards.

Anthony Beckman has brought three bottles to taste and discuss, all from the Sexton Hill vineyard. There is a 2019 Chardonnay and two Pinot Noirs, one from 2019 and the other is a 2011.

They grow many varietals and use about 10% of the grapes to make their own wine. They sell the rest to other winemakers. Sexton Hill is on the road out of Santa Rosa toward Sebastopol. Anthony remembers John Balletto bringing him a map of it and told him he wanted him to design the vineyard. It turned out to be one of the best places possible to grow Pinot Noir and Chardonnay. It was an old apple orchard. He was excited because they knew it was an ideal site for world class wine. The first crop was made into the 2011 and this is the Sexon Hill Pinot Noir from that year.

They taste the Chardonnay first. Dan Berger says that it is such a cold area that planting Chardonnay was considered a risk, but, “it panned out like a charm.” The Chardonnay is the 2019 Sexton Hill Vineyard, native yeast ferment, native ML ferment, all done in oak. The acidity gives it weight and balance. Dan says the aromatics have some tropical fruit and the traditional citrus notes, but it’s already 3 years old and while it may benefit from further aging, it is ready now. It is wrong to assume that white wines aren’t for aging. A good 10-year-old Chardonnay is a revelation to most people. It’s understandable that if people spend $50 on a bottle of wine they want to drink it right away.

Anthony Beckman describes the career he left in order to get into wine. He was a project manager in San Francisco but knew it was time to make a big change. The advisor at UC Davis told him to go work a harvest before deciding to study enology. He did that at Quivera in Dry Creek and fell in love with the process. He went right from there to New Zealand and then back to take all the science classes he needed to get into Davis. While at Davis he worked at Taylor’s market in Sacramento where he was the wine buyer. In 2002-2003 he was stocking Balletto wines.

Next, the Pinot Noirs

Next they taste the 2011 Pinot Noir from the Sexton Hill. Anthony says it had the strongest tannins of any Pinot Noir he had ever seen, so he had to adjust his technique. Dan says it is delicious, soft and silky and that it has matured very well. The 2019, next up, also had great acidity and promises to age well. This 2019 right now is exuberant like a 2-year-old child. Dan tastes the future in this wine. The color is light, which Dan prefers. Normally a wine like this would be $75 dollars but it sells for $50.

All the Balletto Vineyards single-vineyard wines are only available at the vineyard. But their bigger productions are at Bottle Barn and in retail locations and restaurants all over Sonoma County and northern California. 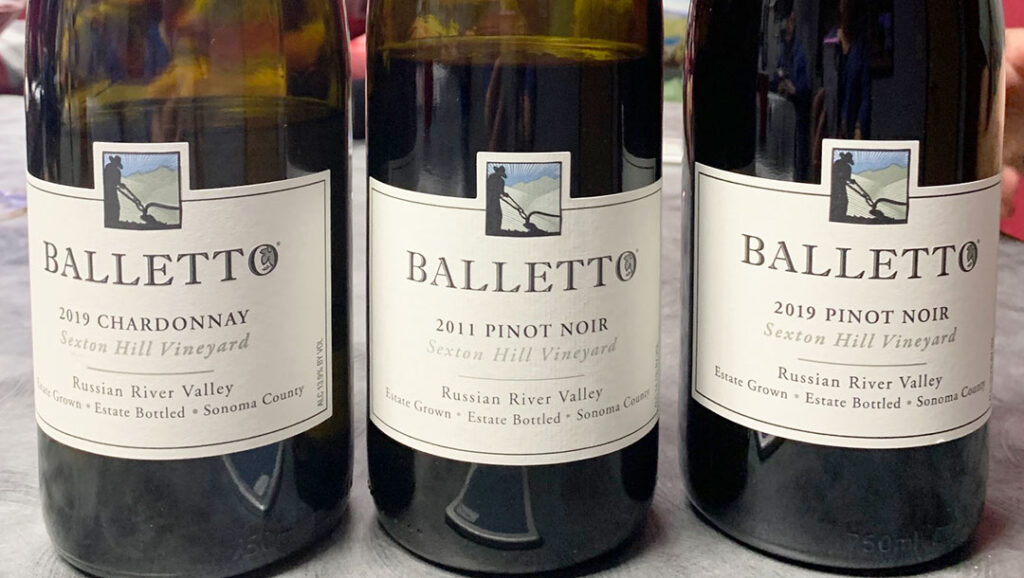