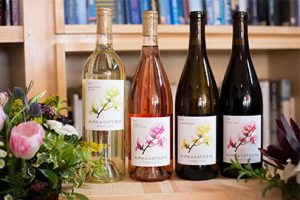 Bibiana González Rave, owner and winemaker of her own label Alma de Cattleya is our guest today, together with Robert Larsen and The Larsen Projekt. Robert has been on the show a few times before. Bibiana was born and raised in Medellin, Colombia, including during some of the most turbulent times there. She went to France to work and study, for 6 years. She came to California in 2004 and she started her brand in 2011 as a showcase of Sonoma and Napa Valley. She does it all, she is the winemaker, sales agent, general manager and also a mother of two.

Dan has been writing about wine for more than 40 years, and very rarely does such an impressive wine come in “over the transom” like this one did. Their production is pretty small. They made 300 cases of Rosé, 1000 of SB. She wants to keep affordable price points. Cattleya is the name of an orchid which is the national flower of Columbia. In the name, she wanted to showcase her roots without using her personal name. She is the only Columbian winemaker in the world. They were not a wine making country, they are far from Chile and Argentina, they don’t have seasons, they are more tropical, and they don’t have seasons, so there is no production. That’s why she went to France for her training.

Dan says that winemakers who trained in Europe are very respectful of acidity. The wines show a personality in their acidity, and a tiny sip is enough to sense what’s happening.

Bibiana has brought a 2017 Chardonnay, Pinot Noir, a Sonoma red blend and a Napa Valley Cab. Each one was aged and barrelled for 15 months. Dan says the Chardonnay is not trying to emulate the richer styles of wine. It is more like a Chablis, with citrus tones and great acidity. Bibiana says the aging was in neutral oak. She loves the complexity from using different clones, Wente and Dijon clones. Dan says this is an astoundingly complex wine, but not in the usual sense. This is subtle complexity.

They taste their 2017 Pinot Noir. They label it Sonoma County but it has some Sonoma Coast fruit in it. Dan says it needs to breathe, and it’s very young. It could stand three hours in a decanter. Great Burgundies are not released until they are three or three and a half years old.

Bibiana has chosen to use the DIAM cork. These are almost the equivalent of screw caps, as far as security. The seal is excellent, there is no oxygen at all. There are ratings for these corks that measure their impermeability and all the French producers are adopting it.

The last bottle Bibiana has brought is the only Napa Valley Cabernet that she makes. Since she trained in France, she knows the style. She wanted it to be priced below average for the region, so this is only $48. Dan detects wild cherries and tobacco flavors in it.