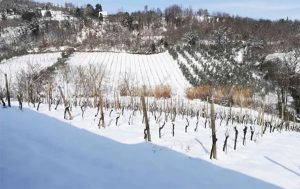 The Tenuta dell’Ugolino vineyard, in winter.

Don Chigazola of Chigazola Merchants is back on California Wine Country with Steve Jaxon. Don is just back from Italy with wines from the region of the Marche (“MAR-kay”) which is located on the eastern side of central Italy, on the Adriatic coast. Don Chigazola’s business is to travel the back roads of Italy to find great wines which he buys wholesale and distributes it on his company website. Don speaks Italian well enough to get into conversations with the local people, in order to find the wines that the local people find most interesting. Today Don has brought wines from two of his favorite small producers of white wine, which are sold at the Chigazola Merchants website.

Don has brought two different bottles of Verdicchio, from Tenuta dell’Ugolino. Verdicchio is a popular white wine in Italy but is not well known outside the country.

Don has also brought two other rather rare Italian varietals, from the Madonnabruna winery, one called Passerina and another called Pecorino (which is not to be confused with sheep’s milk cheese!)

Dan Berger says that there are a lot of Italian white wines that are all delicious, and quite different among them. Italy is known for reds. They have been making wine for so long, yet in the past, some of their white wines did not travel well and did not have a high profile on the export market. The Italians liked to use concrete vats, for fermentation, which can’t control temperature. Now they use stainless steel. They taste a Verdicchio wine, which is a grape whose name means “green” since its skins are quite green. Dan says this wine needed stainless steel to make a wine that is exportable. This is the most popular white wine in Italy and it’s fabulous. There is no such thing as Chardonnay in Italy (there is a little –ndr) but Verdicchio is everywhere. The winemaker produces two Verdicchio wines, one from about 1200 feet elevation, so cold nights and warm days. Dan says it is a fresh, light, fruity wine, and is delicious. Only in the last decades are the Italian whites this good. There is also one called Passerina, and yet another called Peccorino, (also the name of sheep’s milk cheese).

Steve asks Don about Prosecco. There is a lot of Prosecco made in the northeast, but the best is DOCG from Val Dobbiadene. Dan says that the Italian Prosecco producers produce their wine fast, to compete with the Spanish Cava, as an alternative to more expensive French or Italian sparkling wines.

The wines that Don has brought today are the ones that he has available now on his website. This is just about the only place to buy these wines, in the US, since Don’s selection is so personal and on a small scale. Dan Berger says that he took a trip through Italy with his wife about five years ago, and found a lot of great wines that he will never see again. The people were completely unpretentious and the cafés are wonderful, in the small towns.

Don mentions that in the Marche they have a lot of seafood so these wines pair perfectly with that.