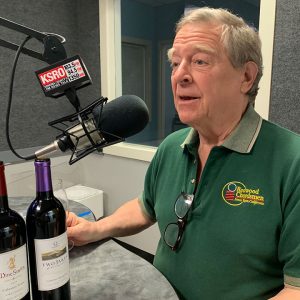 But before we begin with Clark, we will taste a bottle from Dan Berger’s extensive personal cellar. This is a 2004 Peter Lehman Shiraz from Australia. It is a bit rich and has some plum flavors. It is 17 years old and is past its prime. It was lost in the cellar and Dan forgot about it.

Clark Smith is back with us on California Wine Country today. He is a consultant to about 120 wineries, after a whole career training wine makers. He loves European wines, which are balanced and age well. He calls that “Euro-centric wines.” He likes to say that he makes American “forgeries” of European styles. Today we will taste his Cabernet Franc which is a good example of that. He also likes to use an American grape called Norton.

Clark Smith has published a book on this subject, called A Practical Guide to Pairing Wine and Music, which is available as a Kindle book on amazon, at that link.

For example: If you want to make a Cabernet Sauvignon taste terrible, play a polka. Cabernets are dark and angry and if you play happy music around it, it will taste awful. 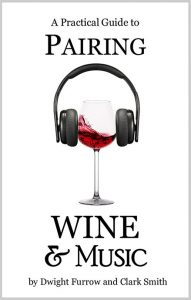 Clark Smith credits Don Blackburn for coming up with this idea. Dan is a friend of Clark Smith and he didn’t like the Aroma Wheel approach as a framework for the flavors of wine. He wants to look at the whole wine. He did an experiment with about 100 people, and he gives people 3 wines, a Beaujolais Nouveau, a Pinot Noir from Burgundy and a big bad Cab. Then he played the following music:

Then he asked people to match the wines to the music. If it had been random, the assignments would have been about evenly distributed among the wines. But people put the light frilly music with the Beaujolais and the Carmina Burana with the Cabernet.

That’s an intellectual exercise. But then, try playing the Carmina Burana with the Beaujolais, and it tasted horrible. What it means is that the feeling in the music and the wine can be aligned, or misaligned, and you can sense that. For the rest of this very interesting episode, we hear music and taste wine and compare the sensations of the pairings.