When commenting on a Riesling, Dan Berger often says that when the flavor and acidity are just right, it would go very well with some spicy Thai food. Today we have Melissa Hotchkiss, sommelier at Sea Thai Bistro in Santa Rosa, who brought some delicious Thai food to taste with some Rieslings and other wines. 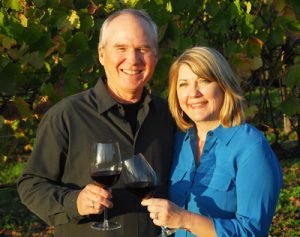 Don Chigazola is an importer of wines from Italy. He and his family travel to Italy to find great wines, which are otherwise off the radar of the average American retail buyer. He brought some wines from the Campania region near the Amalfi coast, which is near where Steve’s grandparents came from.

The first tasting is a Falanghina from Montemiletto, Campania south and inland from Naples. They have volcanic soil thanks to the eruption of nearby Mt. Vesuvius, which is great for growing grapes. Falanghina is one of the oldest varietals in Italy. It is light and delicate but also has some mid-palette flavors. It’s not aged in barrels like Chardonnay, but it has a citrus flavor that goes well with the food. Melissa describes an appetizer from Sea Thai Bistro. They have more than 40 wines by the glass there. Dan says that their food is distinctive, compared to other Thai restaurants.

Don Chigazola describes wildflowers in the nose of this glass of Falanghina. Dan calls it delicate with good flavor in the mid-palette. This Falanghina comes from a family winery in Campania called Macchi Santa Maria. They have three generations making wine and this was produced by the grandson, Oreste De Santis. They have a very small production, of very high quality.

Melissa tells how they started Sea Thai Bistro in Petaluma and became popular so they moved to Santa Rosa. They have grown and have a full bar, a big cocktail menu, a great wine list and beer selection.

Next they taste a Greco di Tufo which is one of the best known Italian whites. When it’s produced around Tufo in the region, it gets the official DOCG designation of Greco di Tufo. (DOCG means Denominazione di Origine Controllata e Garantita.) Dan describes it as having a full body but not diminished by putting it in barrels, which would have meant losing all the dry flower aromatics. Dan says, “this is a serious wine. (…) The richness doesn’t show up as a light or heavy aftertaste, it’s so delicate on the tongue. It’s got some mid-palette weight.” It’s like Chardonnay without the weight, but has good minerality. They taste toasted almonds and dry aromatics.

Don explains that the whites from this district are gown at an elevation of about 2000 feet, or 600 meters above sea level. So it sees some pretty wide temperature fluctuations.

Steve asks Don Chigazola to describe his company. He and his son go to Italy to look for wine. He looks for small producers who have a deep history of winemaking. When he finds one that is exceptional he develops a relationship with them. Some of these wines have never been in the US before. Some of it is at Bottle Barn, some are distributed to restaurants and some is sold on their website to the public. He travels to Italy and goes to the park to meet the locals and asks them what the best local wine is. On his last trip he went out this way and mentioned he would visit Macchi Santa Maria, and the locals told him that they were the best.

Next they taste a Riesling that Melissa brought, made by Heinrich Spindler. Dan mentions it has “petroleum notes” which makes Steve ask what that means. Melissa says it has tropical flavors and goes with a red curry with green beans that they brought. Melissa mentions that they have 15 different Rieslings by the glass at Sea Thai Bistro.

Dan mentions that he is a VP of the International Riesling Foundation. He loves it and compares it to walking in a hall of mirrors, every angle is different. The paradox of Riesling is that it is the immutable grape… that changes every 5 minutes. It’s always changing and always reflects the region where it is grown. For example, in Mosul or Rheinhessen, it takes on the properties of the soil. There is not a lot of in Sonoma County. They have one from Mendocino today. It requires a cool climate. Since Pinot Noir grows best in Sonoma County, they are growing more and more Pinot Noir and less of others like Riesling. Austrailia makes completely dry Riesling. They’ve tasted them from upstate New York, Michigan, and a couple of weeks ago, one from British Columbia that was shockingly good.  Dan mentions that there are 5 wineries in Michigan making fabulous Riesling.

Dan asks Don why Italian whites don’t get the recognition that they deserve, and he thinks it is because they live in the shadow of the reputation of the Italian red wines. Don thinks that it’s because the Italian reds are the ones that have been imported. Chianti is the most imported wine from Italy, even today. There is good and bad in that. What US wine consumers see is mainly reds. That has changed in the last 15 years. As Italy does more outreach and the producers do more outreach in this country, we get more varieties here.

Dan points out that in California, we don’t have as many varieties as they produce in Italy. There are over 400 Italian varietal wines. There is an tremendous opportunity for education. People ask Don Chigazola why they should try his wines if they are living already in wine country? He says if you didn’t try them, you would be missing 90% of the wine in the world because California only accounts for 10% of world production. Next they taste an Italian Prosecco that is completely dry. Steve notes that Prosecco is often sweet but not this one.

Steve asks Don to talk about Sicilian wines. South of Rome, there are many wine regions. The northern wine regions get all the attention, Piemonte, Veneto and Toscana, mostly. But Puglia and Basilicata, Campania and Sicilia all produce many great varietals. There are DOC and DOCG designations all over Italy, not just in the big northern wine producing regions.