John Pepe, Pech Merle winery winemaker at, is this week’s guest, joining Steve Jaxon and Dan Berger. The name Pech Merle is a name in Occitan, an old dialect of French. The R in Merle is silent. It translates to “the cave under the hill” in the Occitan language (pronounced “OC-si-tan”).

It is a boutique family run winery. The first vintage was 2008. The founders were visiting Pech Merle in France and liked the name. They decided they wanted to have a cave winery. One of the owners, Bruce, produces and sells structural contrete used for building bridges and building, which is also used for making wine caves. Their first vintage wasn’t even on the market until 2010. But this is the end of their tenth year of existence. Their business has grown, they are sold in 3 states and are sold at Bottle Barn. Some wines are for commercial sale, others are for tasting room enjoyment only. 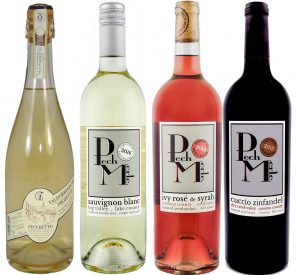 Steve asks John how he got into wine. His wife and he moved out from NY, he was a medical technologist, so he got a degree in viticulture, he was a vineyard supervisor and then got interested in winemaking. But for him as a winemaker, being a viticulturalist is key. He works in the vineyard of all the suppliers of grapes for his wines.

Dan adds that Sonoma County is a great place for sharing information among winemakers and he has good connections in the community. John was a judge at Dan Berger’s Int’l Wine Competition 2 weeks ago.

The winemakers group in Geyserville has fantastic quality. John took over the group’s organization. They learned the importance of pH and acidity. He says most wine today structurally does not have enough acid. Dan agrees. Balance and structure are what make wine go with food. John says that the trend is high ripe, high alcohol, sweet, and the grapes don’t have enough acidity. Some winemakers try to make it drinkable right away. He wants more acid.

First they taste a Zucchetto Prosecco from the town of Valdobbiadene in the hills north of Venice, Italy. It’s a dry white sparkling wine. Lots of Prosecco is too sweet but not this one! Dan says it’s good for having with food or not, just a good brut style.

They taste a 2016 Lake County Sauvignon Blanc from Loasa Vineyard (in the Big Valley District AVA). “Hell of a nose,” says Steve. It was Dan’s Wine of the Week about 3 weeks ago, in his Press Democrat column. He says it’s succulent without being sweet. It’s soft but has gorgeous structural acidity. It’s dry, but ripe fruit. You get a blast of acidity at first, which makes it taste juicy. Dan thinks is would go well with oysters. John notes, that’s why they serve oysters with lemons, for the extra acidity. Steve says don’t serve it too cold, or you’ll lose the flavors.

John says that Lake County is emerging as a good region for Sauvignon Blanc and Cabernet Sauvignon, because of the heat, same as Dry Creek Valley. If you make Sauvignon Blanc in Dry Creek, the sandy gravelly river bottom gives it the minerality and the high heat ripens it. Sauvignon Blanc tends to want to bear heavily. A farmer needs to get 6 tons to the acre to make it work for him. The heat ripens it just right and cooks out some of that green grassyness. Dan would give it a year in the cellar.

Their slogan is “Devotion never tasted so good.” The categories in their wine club are Flirtacious, Smitten and Devoted.

The next tasting is the Ivy Rose de Syrah. This wine is named after Ivy Rose, the lady on their staff who does all their graphics and logos. Dan says this is a rosé that is made in the proper way, direct to press. John explains that they buy the Syrah grapes specifically for rosé; they don’t have a red Syrah, so they don’t do the maceration and bleeding process. Their rosé is on the pink side, relatively dark.

Dan thinks the rosés are getting better and better. John likes to make his rosés with a little more color. The color comes from the skins and so does the flavor. Dan says it’s the wine you want on the table when you’ve ordered fish and your wife has ordered steak, because it would go with both. Dan says you can actually taste the tannins in this wine. It is so food friendly that John says it is great to have around at the holidays.

Dan notes that a lot of producers don’t try to make rosé from Syrah because it is more difficult to make, but that John has mastered it. John also says he is happy with the consistent pink color that he gets from it.

“Rosé is on the march,” says Dan. John also likes Sangiovese rosé. He also admits that this Ivy Rose de Syrah wine is about 10% Zinfandel which adds an extra little bit of spice.

The next wine is their Cuccio Zinfandel. The name of the vineyard comes from Gary and Diane Cuccio own the vineyard. This Zinfandel comes from the Deaver clone from Amador County. He first planted it in the 1940s. The old rootstocks are still contributing, says Dan.

John finds that it has a kind of savory spice going on, and its richly colored. He uses 50% American and French oak, to get some of the rich vanilla sweetness from the American oak. Dan says it has such good balance that it could go with a steak or other red meats.

The Occitan language emerged as the variety of French spoken in southern France about one thousand years ago, at the same time as the other modern Romance languages and dialects. In the Occitan region of southern France, there are several sites of prehistoric cave art which date back 16,000 to 29,000 years, long before the emergence of French or Occitan. We know nothing about the language spoken by the people who painted the caves at Pech Merle, Lascaux and elsewhere in the region. Pech Merle is the Occitan name of a prehistoric cave painting site in the middle of southern France (located 65 miles north of Toulouse). The Pech Merle Winery is named after those caves.