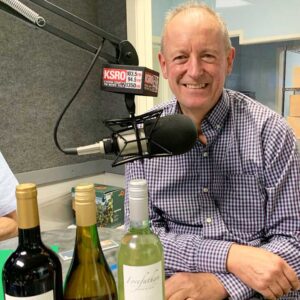 Winemaker and consultant Nick Goldschmidt of Goldschmidt Vineyards is back on California Wine Country with Steve Jaxon and Dan Berger. Co-host Harry Duke is back in the studio this week after his cross-country trip. Nick was on CWC on this episode on May 9, 2018. He was back for this episode on Aug. 19, 2020 with three wines named after his daughters, and once more in February of this year for this episode.

Goldschmidt Vineyards has an active Instagram page and this YouTube channel, where Nick posts videos about making wine both for his own production and for his clients in the northern and southern hemispheres. Dan Berger says that having worked in New Zealand and Australia makes one a better winemaker.

Nick’s first vintage was 1998. He was a winemaker at Simi for 15 years. Louis Vuitton owned a lot of wineries around the world including Simi. At the age of 27 they put Nick in charge of blending still wines for their worldwide production. He got to travel around a lot. Today about half of his work is consulting, the rest is his own winemaking.

They taste the 2021 Forefathers Sauvignon Blanc. The Forefathers is what he calls the best appellation for that variety in the new world. Under the label the wine is called Waxie (pronounced Wax-eye). That is a bird that lives in New Zealand that eats all the grapes. Dan Berger describes an additional spice component in this wine that distinguishes it. Some of the best of this wine never leaves the country.

Nick describes how he uses juice-lees contact to let the wine fully develop texture. When they press the grapes they keep some pulp and skins and leave it for 10 days. Dan tastes fresh gooseberries and tropical fruit.

Goldschmidt Vineyards website describes itself as dedicated to single vineyard sourced wines from Alexander Valley in Sonoma County and Napa Valley Oakville. They are also in New Zealand, Australia, Chile and Argentina. Four of his five children are involved in winemaking with him. His pandemic bubble had 9 people, five children and two partners and they went through 1500 bottles of wine in 19 months.

The 2021 Singing Tree Chardonnay is a field blend, no clones. No ML, but he doubles the lees. So he gets some of the creamy texture that usually comes from oak.

Rodney Strong is doing their Fall Maker’s Market on Saturday November 19 on the concert green at Rodney Strong, with artisinal gift vendors, snacks and mulled wine.

Nick brought the same wines as in 2018, but more recent vintages. He chose them because they are available at Bottle Barn.

The 2021 Katherine Cabernet, named for one of Nick’s daughters, is the last wine they open. “If you want to make a young wine look soft, cook eggplant, because it has a lot of tannin.” Harry notes the black cherry color and flavor. Dan suggests it would go well with any red meat.