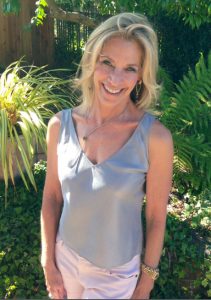 Keith Adams of Wm. Cofield Cheese, Joy Sterling of Iron Horse Vineyards and Dan Towers of Ehret Family Winery join Steve Jaxon and Dan Berger today. California Wine Country today is live at the Flamingo Hotel in Santa Rosa where there is a celebration of the 80th anniversary of the show’s home station KSRO and also the 60th anniversary of the hotel, a Sonoma County landmark.

Dan tells how cheesemaking has made a return to greatness in Sonoma county in the last 15-20 years. It has evolved since Rouge & Noir was started many years ago. Now there are several fine local producers. Wm. Cofield Cheese makes traditional English cheeses. Steve also introduces Dan Towers of Ehret Family Winery. The Ehret family also owns the Flamingo Hotel. That’s why his name is on the gigantic chair in the lobby.

Rob Hunter, Keith’s partner in Wm. Cofield Cheese, is also on the show today. Rob has been a winemaker for 35 years. Keith and Rob both went to UC Davis. Keith started making cheese in Minnesota about 10 years ago. He’s from California and married a Minnesota girl. His kids are grown and now this is his dream come true, to build a cheese making business making British-inspired cheese in Sonoma County. They are located in The Barlow in Sebastopol.

Rob has been in Sonoma County since the age of 12. His father had Hunter Farms in Glen Ellen and made Robert Hunter Champagne. He was the winemaker there for 30 years and he wanted to do something new. Keith provided that opportunity. It is an adventure into a new science. Keith also let him help design the cheesemaking facility. They have been in production for 9 months and they are now releasing their first cheeses. It was 5 years in planning and took them 7 months to build it. 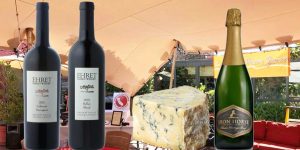 The wines, the Bodega Blue and the scene at the Flamingo.

Dan explains that English cheeses are governed by different rules compared to other countries. For example, Cheddar is a local production. There are other cheeses called Cheddar but they are not the Sommerset County (England) style. For example, “Cheddar” is not protected, but Stilton is. To make Stilton, you have to be in the original district using pasteurized milk. So they don’t use the “Stilton” name, they call theirs “Bodega Blue.” They use raw milk and it is a very good Stilton, says Dan.

Dan Towers is the wine ambassador for Ehret Family Winery. Their vineyards are in Knight’s Valley, one of the lesser known appellations in Sonoma. Dan explains that it’s on the Sonoma County side of the border but it is closer to the Napa geographical area. They taste their 2011 Cabernet, their flagship wine. They made 600 cases. He is proud of their terroir. Dan says the wine is very distinctive and goes very well with the cheeses. 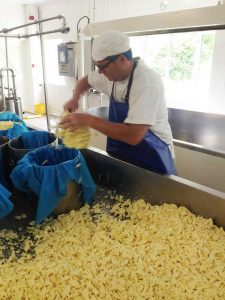 Then they taste some cheese curds, which are a step in the process of cheesemaking but they can also be eaten different ways They describe how some of their neighbors who run restaurants are using their cheese curds in interesting ways.

Next they taste their Cheddar and Steve says, “That is great!” Keith explains the process of handling the curds. Steve tastes some and says they are nice at first but the finish is not so nice. Keith says that’s because it’s only a step in the process and isn’t meant to be complex after only one day of production. He says some people in the mid-west eat them as snacks. Fried cheese curds are a popular beer snack, for example, Bear Republic is serving them at both of their locations. They’re also included in the French Canadian recipe Poutine.

Then they taste their 6-month cloth-bound cheddar, which they have just released two months ago. The cheddaring process is unique, there is actually a verb, “to cheddar.”

The last wine tasted is the Bella’s Blend, 81% Cabernet Sauvignon and 19% Cabernet Franc, which brings a little bit of acid to make it go with the cheese. Dan says the Cabernet Franc gives it a spicy component and since it’s a 2010 it has 7 full years of vintage so it’s gorgeous and silky. It has more varietal character because of the Franc.

Steve asks Joy for her thoughts and she agrees, saying, “I think that the Cabernet Franc is a delicious addition to the wine.” Joy has provided champagne for the toast at the celebration they are attending at the Flamingo.