Dan Berger opens with a tasting of “A Proper Pink” which is a rosé produced by Randall Graham, owner and “king for life” of Bonny Doon Vineyard in Santa Cruz. It is a slightly sweeter rosé. It is made with Tannat grapes, which is a red wine grape, so to make rosé you have to get the skins out of the juice pretty quickly. It is made from 69% Tannat and 31 % Cabernet Franc. It sells for $15 or $16 per bottle. Dan says that it is so flavorful that you could even put ice cubes in it and its flavor would hold up. 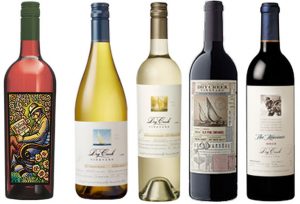 Dan says that Dry Creek Vineyard and Tim Bell have a real success story, even if Dry Creek does not have a flashy reputation as it deserves to have.