Winemaker Clark Smith is back on California Wine Country with Steve Jaxon and Dan Berger, with some wines he has made from unusual grapes, including the native American variety called Norton.

Clark Smith joins Steve Jaxon and Dan Berger on California Wine Country today. He has his own label WineSmith Wines, he is the winemaker for Diamond Ridge, and also an author and professor. His new book is called Postmodern Winemaking. 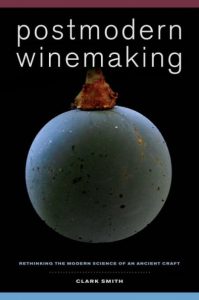 Clark Smith dropped out of MIT in 1971, came to California and got a job in a liquor store. Eventually he tasted every wine in the store and he sold wine for 5 or 6 years. He made his first wine in 1976. When he decided to make wine, he ended up at Davis and finished his BA and MA in wine. Then, he had a series of jobs in wine and many jobs as a wine consultant.

He makes his own wines and consults to about 120 wineries. He gives classes including fundamentals of wine chemistry and has taught over 4500 students.

Dan Berger explains that today we have wine from grapes that nobody has ever heard of. There is a lot more wine than Chardonnay, Cabernet and Pinot Noir. For example, Don Chigazola a few weeks ago told about lots of white wines in Italy that are unknown here. There are also styles that nobody else is doing.

Clark has a wine that he calls Faux Chablis and his current vintage is 2005.

There are really two wine industries, says Clark. There are 64 wineries that make 95% of the volume of wine and 100% of what is sold in stores. This is like pop music. Then you have 25,000 wineries that make the other 5%, averaging 2,000 cases. Clark is one of these. He has to make his own kind of music. He has to have his own unique sound. So every wine he’s opening today, there is nobody else in California doing it. These wines are not in stores. You have to come see them.

His wines come from all over California because the varieties are planted all over the state. Clark also says you have to get out of the Napa / Sonoma high real-estate land. If you can sell cabernet for $200 per bottle, you won’t plant Barbera there, which is a shame.

They open a 2014 Santa Cruz Mountain Sparkling Grenache. They also make a red wine from this vineyard. Clark explains about champagne, calls it the worst white wine in the world. Since our grapes in California are full of flavor, our sparkling wines will taste better. It’s a 2014 so right now it’s very fresh. 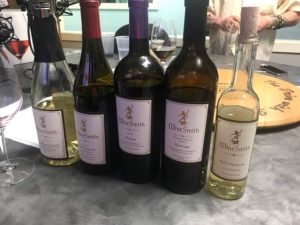 Next is a red wine, a 2015 WineSmith St. Laurent. His saint’s day is August 10, which is the day this grape is harvested. It’s early so it’s low in alcohol. The wine is extremely soft. “It’s kind of like a cynical beaujolais,” says Clark. Dan Berger says the flavors are unique to the variety. It’s sort of like Beaujolais but this is more complex with a dry aftertaste. Despite its softness, it is dry.

Diamond Ridge is a vineyard in the southeast corner of Clear Lake, next to the lake. The wines capture incredible fruit and the wines age for a long time. He has made wine there for 12 years now. Dan says that Cabernet Franc rules up in those cold areas and can make great wine.

Next they taste the Norton. The Norton grape is from Virginia where it was found in the woods. There are 500 wineries making it in the US. It makes a dense, plush wine, “if you can get it right.” It is disease and winter tolerant. But in most places it grows where it can’t get ripe enough, though.

Clark Smith’s new book is called Postmodern Winemaking. If you go to his website, the promo code is IKNOWCLARK to get a 20% discount.

The first half of the book is highly technical, about wine structure and aeromatic integration. Non-winemakers can skim over it. Starting with chapter 12, it gets easier. He comments on all the current issues in winemaking. It ends in a chapter called Liquid Music, where he says that wine is processed cognitatively the same as music.

They taste a Meritage wine, of the five Bordeaux varieties, from an organic vineyard. He used no sulfites yet it aged in the barrel five and a half years.

The last one is a Petit Manseng. Grapes are normally 24 or 25% sugar but this variety comes in at 32%. The wine is very sweet but perfectly balanced. It could go with chocolate mousse.